He said that on average, one language vanishes every two weeks, often as its last elderly speakers die.

Half of the world’s 7,000 languages are expected to disappear before the end of the century.

Harrison also said that indigenous people had an intimate knowledge of their environment that was lost when their language disappears, along with concepts dealing with mathematics and the nature of time, often unfamiliar to Western thinking.

“Most of what we know about species and ecosystems is not written down anywhere, it’s only in people’s heads. We are seeing in front of our eyes the erosion of the human knowledge base.”

Meanwhile, the study also found that Bolivia has twice the language diversity of the nations of Europe combined, but many of the smaller tongues are being smothered by Spanish or other languages.

Placing third and fifth on the list were regions of North America, including British Columbia in Canada and the US states of Washington and Oregon, as well as an area covering the US states of Oklahoma, Texas and New Mexico.

Eastern Siberia, also with endangered native languages, was fourth on the list.

The researchers found that there are quite a few languages, dozens if not hundreds, that are down to one, two or three speakers, or have lost their last fluent speakers, but have few “semi-speakers” who are said to have a passive knowledge of the language.

“Languages often trickle out of existence rather than sort of abruptly disappearing,” said Gregory Anderson, co-director of the Enduring Voices project and director of the Living Tongues Institute for Endangered Languages.

Over the years, some languages have been deliberately exterminated by colonisers or aggressors taking over territory or waging genocide, the linguists said.

According to Harrison, children now decide the fate of a language, by abandoning an ancestral tongue for another language they see as more widely used.

The researchers had travelled to Australia this year to study Aboriginal languages, which are some of the most endangered.

“Australia is amazing because humans have been there for 50,000 years and they represent an unbroken link to the past in a way that other places on Earth don’t,” Harrison said.

“You can really glimpse human prehistory and the mythological beliefs and systems that they have produced and passed on orally with absolutely no recourse to writing of any kind.”

While in Australia they found a man with knowledge of the Amurdag language, which had previously been thought extinct.

They also met a woman in her 80s who was one of only three remaining speakers of the Yawuru language, and was passing on her knowledge to schoolchildren.

The linguists say that such inter-generational exchanges were the only way native languages could survive.

“The children had elected to [learn this language], no one forced them. When we asked them why they were learning it, they said, ‘This is a dying language, we need to learn it’.” 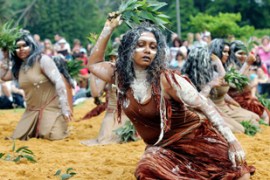