Locals have criticized the $1bn Salween dam project as threatening the livelihoods of millions of people who live along the river.

The project has also been criticised by environmentalists, who say the dam will destroy a remote and ecologically rich region.

Plans have been drawn up for as many as 18 dams and diversions along the length of the Salween river – 13 in China and five where the river runs inside Myanmar or forms its frontier with Thailand. 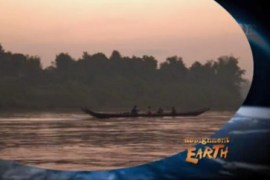 We see how impoverished families are already affected by dams on the Mekong.