“The summit welcomed the progress and encouraged the parties to expedite the process of negotiations and conclude the work as soon as possible so that the next elections are held in an atmosphere of peace,” it said in reference to presidential and parliamentary elections due to take place next year.

Mugabe wants to seek another term. Critics say state control of the media, widespread intimidation and the clampdown on the pro-democracy movement gives Mugabe’s party an overwhelming advantage going into the poll.

Mugabe, who drew the biggest applause on the opening day of the summit on Thursday, was absent without explanation for the closing session.

A Zambian official familiar with the talks, who spoke on condition of anonymity, said that the 83-year-old autocrat was in a defiant mood.

Levy Mwanawasa, the Zambian president, whose country took over the rotating chair of the 14-member organisation, earlier this year likened Zimbabwe to a “sinking Titanic.”

But during the summit, he was more cautious and merely called on Zimbabweans to “maintain peace and stability” lest they move “further backwards.”

Mbeki told a news conference later the rival Zimbabwean parties remained engaged in talks on the basis of a mutually agreed agenda, describing it as “work in progress”.

“They … are making progress in these discussions,” he said, adding any breakthrough would be reported to SADC.

“Everybody is interested that when the presidential and parliamentary elections take place in March next year in Zimbabwe, they should be held in an atmosphere that will result in free and fair elections without controversies and so on.”

But Mbeki said no conditions or deadlines had been set. “Nobody has talked about conditionalities of anything.”

The United States said on Friday it supports efforts by southern African leaders to resolve a political and economic crisis in Zimbabwe.

Sean McCormack, the US State Department spokesman, said in a statement that such engagement shows “the region considers the situation an increasing threat to stability and is committed to a democratic and prosperous Zimbabwe.” 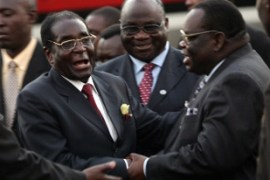