The blast devastated nearby shops and set cars ablaze.
It was the first major attack in the city since a suicide bomber killed 53 people in January.
Humvee reportedly destroyed
Meanwhile, US forces arrested 13 Iraqis belonging to two families after they had stormed a number of houses in al-Nuaimiya neighbourhood in southern Falluja city.

“The Islamic Army in Iraq” group released a videotape claiming responsibility for destroying a US “Humvee” in Ramadi city.

The videotape showed a military vehicle being hit by an explosion in one of the city’s streets.
Al Jazeera could not verify the authenticity of the videotape from an independent source.
Tensions in Iraq have been further heightened after Friday’s attack by US forces on a Sunni-dominated area near Lake Tharthar in Salahuddin province, northwest of Baghdad.
Six children and eight women were among at least 32 people killed in the attack, according to Iraqi police and local officials.
The attack was condemned by the Association of Muslim Scholars, the country’s largest Sunni political party.
The US command has said the raid and air strike killed 20 “al-Qaeda terrorists”, but the association and the Iraqi Islamic Party joined a village mayor who said civilians, including women and children, were killed in the attack.
Source : Al Jazeera 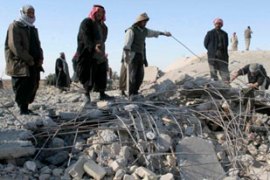 ‘Children killed’ in US Iraq raid

Locals say 32 civilians have died in an operation the US says targeted “terrorists”. 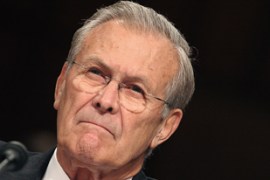 The outgoing US defence secretary is accused of sanctioning torture and abuse. 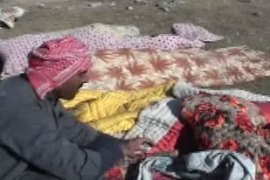 Al Jazeera footage shows that children were among the dead in a US air strike.