He claimed that a high-power rifle with telescopic sight was found inside a car near a site where the governor held a campaign rally and that a military officer had been arrested for meeting with civilian plotters.

A high-ranking military official, speaking on condition of anonymity, told the AP news agency that a naval officer was under investigation.

But the opposition campaign said it had no knowledge of the attempt on its candidate’s life.

“This is a smoke screen. It’s to manipulate the people, but nobody believes that,” Timoteao Zambrano, one of Rosales’s campaign managers, said.

“The government is obliged to safeguard the lives of all Venezuelans, and that includes the presidential candidate,” he said. “If something were to happen to our candidate, the government would be responsible.”

Chavez, who has been president since 1999, has vowed to thwart the alleged opposition plot against him.

“We know what they are up to,” he said of the opposition at a news conference on Thursday.

“Don’t think you are going take the country by surprise, ruin Venezuelans’ Christmas, block highways, set fire to cars, hold protests, stage a coup and cry fraud – that’s what they are saying.

“We are going to win and we hope that the opposition will accept their defeat.”

The former army officer, who is known as El Comandante, has pledged to use the military to put down any post-vote disorder.

Rosales denies that he is planning to instigate street protests and an army uprising after the election.

He called for a fair election himself on Thursday, urging Venezuelans to be watchful against tricks at the polling stations.

“You have got to keep your eyes peeled, act like good Venezuelans and hold your ground to ensure victory,” he told his supporters.

With most state institutions dominated by Chavez’s supporters, the opposition is worried the vote will be rigged against them.

Chavez has also accused Rosales of being involved in a military uprising that briefly forced him from power in 2002.

Most polls have given Chavez a large lead in advance of the election and campaigning ended on Thursday with red-clad Chavez supporters parading through downtown Caracas chanting: “Chavez isn’t going anywhere!” 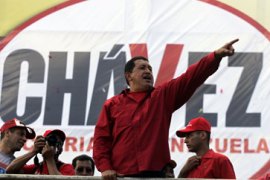 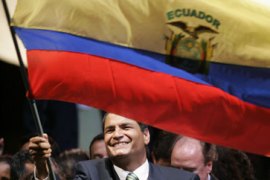