The terms of the agreement included enacting a blasphemy law and allowing “fatwa” – an edict against anyone criticising Islam or its teachings.

“This is horrible … and unacceptable,” said Hasanul Haque Inu, a Hasina ally and head of the Jatiya Samajtantrik Dal Party.

Rashed Khan Memon, chief of Workers’ Party and another backer of Hasina, said: “We don’t take any responsibility for the deal. It will influence our election results.”

But Abdul Jalil, general secretary of Awami League, said the aim of the deal was to muster strength to defeat Hasina’s main rival: Begum Khaleda Zia, the immediate past prime minister, her party, the Bangladesh Nationalist Party (BNP) and its ally Jamaat-e-Islami.

Also entering the race with Hasina are the Jatiya Party of former military ruler Hossain Mohammad Ershad and the Liberal Democratic Party, made up of BNP dissidents.

“This is horrible … and unacceptable”

But analysts and some Hasina supporters said Khelafat Majlis, who unsuccessfully lobbied the BNP for a berth in the run-up to the January 22 poll, was a radical group.

The country’s election commission had extended the deadline for candidate nominations until Tuesday in an effort to lure the Awami League, whose decision to enter the election race raised hopes of a respite from the impoverished South Asian nation’s long running political impasse.

At least 50 people were injured in sporadic clashes between Awami League and BNP supporters as they gathered at an election office in the capital Dhaka to submit nominations on Tuesday, witnesses said.

Police fired teargas and used batons to disperse the fighting groups, they said.

Hasina’s alliance was now working on a formula to share seats in the forthcoming vote, party officials said. Under the formula, the Awami League has agreed not to nominate candidates in constituencies contested by allies, mirroring a similar deal Khaleda’s BNP struck with its partners.

Hasina, who has yet to clarify her stance in the face of growing criticism, and Khaleda are the main contenders for power in the coming polls. The two women have alternated as prime minister for the last 15 years.

Khaleda ended her five-year term as prime minister late in October and handed power to an interim government headed by Iajuddin Ahmed, Bangladesh‘s president. The interim authority is obliged to hold new elections within three months.

Out of Bangladesh parliament’s 345 seats, 300 are contested directly while 45 are nominated by the majority party in the legislature. 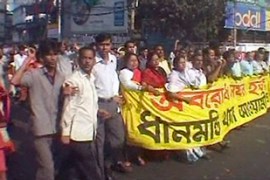 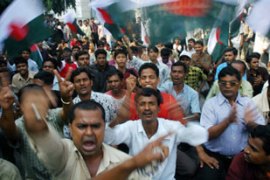 Opposition leader plans to oppose elections unless demands for poll reforms are met.