Du was the deputy provincial Party head, the second-most powerful figure in the booming eastern province of Shandong.

The Party has been ruthless in the removal of individuals that may cause embarrassment to the country before and during the Games.

The sacking follows that of Liu Zhihua, the former vice-mayor and head of construction, sports and traffic projects for the Olympics, in Beijing in June.

He took bribes of “several million yuan” and “helped his mistress to seek profit in projects”, a state television report said.

Liu’s dismissal was the highest official sacking in the city since Chen Xitong, Beijing‘s former mayor and once the capital’s highest Communist Party official, was jailed for 16 years for corruption in 1998.

But China’s clean-up plan has been criticised by many as being too aggressive. 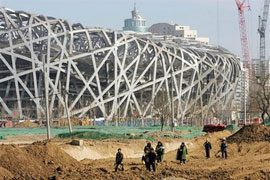 The “bird’s nest” will host the opening
ceremony [AFP]

Sceptics have viewed the sackings and personnel shifts in the Communist Party as efforts by Hu Jintao, the Chinese president, to get rid of rivals before a congress to ratify appointments and policies at the end of next year.

Many hutongs, China’s traditional streets and alleyways, have been demolished in a rush to modernise the city before the Olympics.

Police in many Chinese cities have caused outrage by entering homes and confiscating dogs that were either unlicensed or over 35cm tall. Some dogs were reportedly beaten to death in front of their owners.

According to Amnesty International, the Chinese Olympic project’s construction plan has left more than 6,000 families affected by preparations for the Games.

The human rights organisation said that many of these have been evicted without full procedural protection and without adequate compensation.

They also claim that individuals have been arrested and imprisoned for peaceful protests.

But Beijing has pledged to continue to eradicate any issues that may affect the smooth running of the Games.

Liu Qi, secretary of the Chinese Communist Party’s Beijing Municipal Committee said: “We must tighten auditing and monitoring efforts on the preparatory work of the Olympics to prevent all potential problems.

“Efforts must be made to ensure that staff members involved in the Olympic preparations and venue construction projects remain on track, and make sure the Olympics are clean”.

Dark side of China’s frenetic growth

A string of blistering reports, high-level arrests and promises to tighten the law have shed new light on the murky world of government corruption in China.