Azerbaijan currently pays just $110 per 1,000 cubic metres of gas, but Gazprom has argued that the new price has already been accepted by neighbouring Georgia.

Aliyev has pointed out that, unlike Georgia, Azerbaijan enjoys good relations with Moscow and said it was “not nice” to use the country’s shortage of gas to make them pay more.

Azerbaijan has not been given a deadline for the completion of talks, unlike Georgia which had until January 1 to agree to the price rise or risk supplies being cut off.

Gazprom also wants to cut by more than half the amount of gas its sells to Baku every year.

Aliyev said that crude oil exports could be reduced to meet energy demands at home. That would result in less Azeri crude being shipped through the Russian Black Sea terminal of Novorossiisk.

“We will be forced to reduce crude shipments to Novorossiisk. There is no other solution. Our power stations must work on something,” Aliyev said. “I cannot allow for Azerbaijan to become vulnerable to commercial blackmail.”

Moscow has been accused of using gas prices to put pressure on neighbours but Gazprom officials say they are trying to put their gas sales on a market basis and eliminate the subsidies they have provided to former Soviet republics for years.

Russia also still has to settle a dispute with Belarus, a transit route for Russian gas to Poland and Germany. Gazprom said it hoped to sort out differences with Belarus over pricing and pipeline control by December 31. 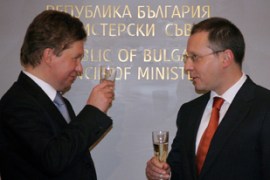