The president said that international efforts have failed in the world’s leading cocoa producer.
“The objective of all of these propositions is to end the crisis through elections. I wish for elections to take place as quickly as possible,” Gbagbo said.
He also said that the long-delayed polls could take place by July, before a UN deadline. Gbagbo said he aimed to finish disarmament talks by the end of next month.
The UN plan entrusted disarmament and the organisation of polls by the end of next October to an interim prime minister.
Gbagbo has said he will not implement any aspect of the plan that limits his constitutional authority, and has clashed with Charles Konan Banny, the interim prime minister.
The president said on Tuesday that the removal of the reconciliation government headed by Banny was something to be considered, but not in the immediate future.
Gbagbo’s constitutional five-year mandate expired in October last year, but he was kept in power under a UN-backed scheme after polls failed to take place. When a second deadline was missed in October, a UN plan gave Gbagbo a final 12-month extension.
Gbagbo also proposed a youth training scheme to tackle unemployment, which has rocketed since the war, and said it would be open to rebel combatants.
He pledged help for the war-displaced to return home, many in the rebel-held north, and offered an amnesty law for the New Forces rebels to replace a 2003 text which he said was now “obsolete”.
The last talks between Gbagbo, rebel leader Guillaume Soro and main opposition leaders in September, chaired by Denis Sassou N’Guesso, the African Union president, ended without agreement.
Gbagbo’s plan did not directly address the rebels’ main concern. They demand identity papers before disarming but dispute the format of an ID scheme due to resume in the coming weeks.
Source: News Agencies

Ivory Coast president to stay on

African leaders have recommended extending the term of Laurent Gbagbo, the president of Ivory Coast, by another 12 months in an attempt to revive a stalled peace process in the West African country. 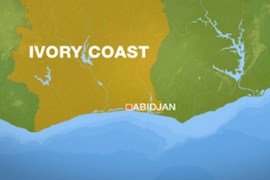 One killed in Ivory Coast unrest

Police quash demonstrations by those opposed to Laurent Gbagbo, the president.

The UN Security Council has voted unanimously to give Ivory Coast’s prime minister sweeping new powers for guiding the volatile West African nation to elections within a year.

UN resolution to back Ivorian PM

A UN draft resolution has proposed giving the prime minister of the Ivory Coast full military and civilian authority to run the country for another year pending new elections.