The report said that Iran is infiltrating Iraq through it al-Quds forces, a special command section of the Iranian Revolutionary Guard Corps (IRGC).

The report described the Badr Organisation – the armed wing of the Supreme Council for Islamic Revolution in Iraq, the biggest Shia party in Iraq‘s government – as the “key vehicle Iran is using to achieve its military security and intelligence aims”.

The Saudi report says the private militia has 25,000 members, and has the support of about three million people, according to the Washington Times.

Furthermore, the Mehdi Army of Shia cleric Moqtada al-Sadr is estimated to contain about 10,000 members, with 1.5 million supporters.

The report says: “Each of these groups is beholden in some way to Iran and has ties to its intelligence and security services.”

The report cites Iraqi tribal leaders as saying that the ongoing Sunni uprising is run mainly by former commanders and high level-military officers of the dismantled Iraqi Baathist government.

Through interviews with military and intelligence officials, the report claims that there are 77,000 Sunni fighters operating in Iraq.

About 17,000 fighters are termed as “jihadi” fighters from other countries.

The remaining 60,000 are former members of deposed ruler Saddam Hussein’s Fedayeen forces or the military.

The assessment concludes that, given historical ties, “Saudi Arabia has a special responsibility to ensure the continue welfare and security of Sunnis in Iraq”.

It recommends that the Saudi government prepare a strategy to deal with the worst-case scenario of full-blown civil war and to share the report with the US, the article said.

The Times article said the report was directed by Nawaf Obaid, who recently was fired after writing an opinion piece in The Washington Post that suggested Saudi Arabia would back Iraq‘s Sunnis in the event of a wider sectarian conflict.

The preface to the report says the report followed five months of co-operation with Iraq and neighbouring countries, and draws on dozens of interviews with current military and intelligence officials in the Middle East. 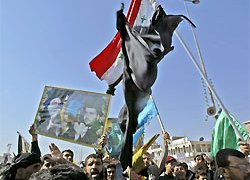 Iraqi Shia figure Muqtada al-Sadr has called on the country’s Shia and Sunni Muslims to stop attacks on each other in the aftermath of the destruction of a revered Shia shrine.

Muqtada al-Sadr, the Iraqi cleric, has said his al-Mahdi Army will help to defend Iran if it is attacked.