The Liberation Tigers of Tamil Eelam (LTTE) said 10 civilians were killed in army shelling, on top of 15 that were killed on Saturday, and accused the military of mounting an offensive on their eastern territory for a second day.

It was not possible to get independent confirmation of what happened behind rebel lines.

Several hundred civilians arrived in the government held town of Kantale southwest of the strategic harbour of Trincomalee in the far northeast on Saturday, and nearly 2,000 more joined them on Sunday, officials said.

Ranith de Silva, a Trincomalee government agent and the district’s most senior civil servant, said: “They [the Tigers] attacked civilian villages, so these people came to Kantale and we are looking after them.

“They are in Buddhist temples and schools. We are feeding them. We are up to 2,800 people now.”

Kantale’s Base Hospital admitted 41 people on Saturday, most of them soldiers, with artillery and mortar bomb shrapnel wounds. Children were among the injured.

Twelve-year-old RD Shantha, who was having his leg treated for a shrapnel wound, said: “I was playing with friends under a cashew tree when the shell fell nearby. I was the only one injured. My friends are OK.”

Further southeast in the rebel-held town of Vakarai, where an estimated 30,000 displaced are living in camps and foreign aid workers have no access, the Tigers’ humanitarian wing, the Tamils Rehabilitation Organisation [TRO], said 17 people had been killed in camps they run.

Arjunan Ethirveerasingam, TRO project manager, said: “Six of our IDP camps have been shelled over the past 24 hours. No fire emanated from these camps.

“We want the government to allow the Iinternational Red Cross and the Sri Lanka Monitoring Mission [the Nordic truce monitors] to maintain an overnight presence in the area so they can witness for themselves.”

The latest fighting comes after Mahinda Rajapakse, the country’s president, introduced anti-terrorism laws this week in a crackdown on the Tigers and their supporters after a failed suicide attack on his brother, Gotabhaya, who is his defence secretary. 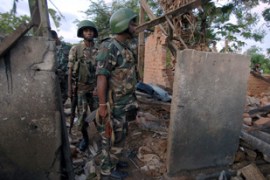