As the protests drowned out the noise of the funeral choir, the priest conducting the ceremony appealed for calm.

Three thousand people were either killed or went missing during Pinochet’s government between 1973 and 1990.

His supporters say he saved the country from political turmoil when he deposed the elected Marxist president, Salvador Allende, in a coup in 1973 and that his rule laid the foundations for Chile’s current economic success.

Pinochet’s eldest daughter, Lucia Pinochet, praised her father for lighting “a flame of freedom” in September 1973.

The military said that up to 60,000 people had flocked to the college for the public viewing of Pinochet’s casket. His body had been on public display in the city’s military academy.

Among the thousands more tortured during his rule was Michelle Bachelet, Chile’s current president, who neither attended the funeral nor announced the traditional three days of national mourning.

When Bachelet’s representative Vivianne Blanlot, the defence minister, arrived, she was heckled and whistled at by mourners.

Lucia Newman, Al Jazeera’s correspondent in Santiago, said her attendance was only due to government protocol.

The general’s youngest son, Marco Antonio Pinochet, has said denying his father a state funeral was petty and the government was “incapable of taking a noble stance at this moment in history”.

After the funeral, a military helicopter took off with Pinochet’s body for cremation, Al Jazeera’s correspondent said.

Extra security measures were in evidence in the Chilean capital on Tuesday as authorities sought to avoid a repeat of the violent scenes after the announcement of the death.

The ceremony started at 11am local time (1400 GMT) at the Military School, led by the head of the Chilean army, General Oscar Izurieta.

Newman said some foreign press have been attacked in Santiago because Pinochet’s supporters say there has been unfair international coverage of the former ruler since his death.

At the same time as the funeral ceremony on Tuesday, a separate demonstration was expected outside the national parliament where opponents of Pinochet said they would honour the victims of his regime.

Mirella Garcia’s brother is one of those whose name appears on Memorial for the Victims of the Dictatorship, as its called,

He was 20 when he disappeared.

She told Al Jazeera that “it’s a permanent pain that’s always there, that corrodes you, that you wake up with and go to bed with every day. It’s hard to understand unless you’ve had a loved one ripped away from you that way”.

According to the latest poll, around 70 per cent of Chileans oppose declaring a day of national mourning for Pinochet, whose economic accomplishments were overshadowed by his human-rights record. 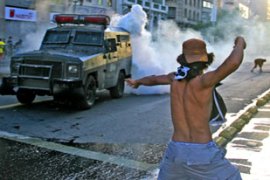 The body of General Pinochet is moved to a military college.