Dili has been ravaged by gang violence in recent weeks, leaving at least a dozen people dead and 75 injured.
The former Portuguese colony voted to break away from Indonesia in 1999, a move which prompted the killing of around 1,500 people by Indonesian troops and anti-independence militias.
The country was plunged into crisis again early this year when Mari Alkatiri, the then-prime minister, fired a third of the armed forces.
The gun battles between police and army factions sparked by the dismissal later spilled into gang warfare, looting and arson, leading to Alkatiri’s resignation in June.
Relative calm returned with the arrival of more than 2,500 foreign peacekeepers and the installation of a new government, but sporadic violence continues.
Source : News Agencies 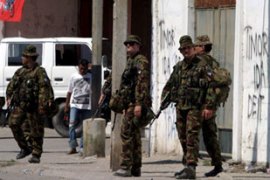 Peacekeepers in East Timor have reopened the country’s main airport two days after a surge in violence between rival street gangs forced its closure.

A United Nations report has recommended Mari Alkatiri, East Timor’s former prime minister, face a criminal investigation over violence in the country year that led to the deaths of dozens of people and 150,000 fleeing their homes.