Calling the situation “grave and deteriorating”, the Iraq Study Group said in its report released on Wednesday that the Bush administration’s approach was not working.
It called for new diplomatic efforts in Iraq and the region, and recommended that the US military accelerate a change in its main mission so that most combat troops can be withdrawn by spring 2008.

Despite offering 79 non-binding recommendations to tackle Iraq’s  “dire” plight, the bipartisan group, led by James Baker, the former secretary of state, and his fellow co-chair Lee Hamilton, a former Democrat congressman, said there was “no magic formula” for success.

She said: “We welcome this report and regard it as a very important step.

“It means, God willing, the end of this era of American intervention in the region and the American occupation of Iraq which brought catastrophic ramifications on the whole region.”

The Iraqi government said the report was in line with its own plans to stop the rampant violence in the country, but said that there was no magic wand to solve Iraq’s problems.

Sadiq al-Rikabi, a political adviser to Nuri al-Maliki, Iraq’s prime minister, said the report’s recommendations were “positive on the whole”.

He said they conformed with the government’s own plans to deal with the rampant violence engulfing the country since 2003.

“The parts I read were very positive,” he said.

A spokesman for the Association of Muslim Scholars, a Sunni Arab group accused by some Iraqi officials of having links to anti-government groups, criticised the report and cast doubt on whether one of its  recommendations – training and equipping more Iraqi security forces – could produce results.

Speaking on Al Jazeera, Sheikh Mohammed Bashar al-Fayadh said the recommendations in their entirety gave precedence to US interests over Iraq’s and sought “guarantees for an exit [from Iraq] but without paying heed to preventing a civil war from breaking out”.

“The report recommends the training of Iraqi forces, but will it reach the level of the American army? The answer is ‘no’. If the American army is unable to settle the question and get out of this predicament, so how can that be?”

Barham Saleh, the deputy prime minister, said on Wednesday: “The situation is grave, very grave in fact, and cannot be tolerated. Absolute dependence on foreign troops is not possible. The focus must be on boosting the Iraqi security forces.”

But he said that improving the battlefield capabilities of the Iraqi armed forces would not be “the magic wand that brings a solution in one day”.

Saleh said the recommendations were in line with the government’s goals.

“In fact, the recommendations, at least in principle, are in agreement with the national Iraqi vision that calls for reinforcing Iraqi capabilities, the handover of the security file to Iraqis and the respect of the Iraqi will.”

He, however, acknowledged that “there may be some details on which we differ”. He did not elaborate.

“There is no doubt that the government of Iraq carries a heavy burden,” he said. “It has a duty to deal with this problem [violence], but what matters to us most is the opinion of the Iraqi people.”

Hoshyar Zebari, the Iraqi foreign minister, speaking on Al Jazeera from Rabat, Morocco, sought to play down the report’s recommendation that the threat to reduce military and economic support to the Iraqi government should be used to persuade it to meet benchmarks in its efforts to curb violence.

Lakhdar Brahimi, a former UN envoy to Iraq, said: “People say talk to Iran and Syria and the problem will be solved. It’s not that easy.

“If you talk to Iran you may solve one part of the problem, but you will create many others.”

Mark Regev, the Israeli foreign ministry spokesman, said: “It would not be appropriate for Israel to formally respond to what is ultimately an internal American report.”

However, some Israeli commentators cast doubt on a central thesis of the report – that a concerted effort to resolve the Israel-Arab conflict would improve the situation in Iraq.

Gerald Steinberg, from the BESA think-tank at Bar Ilan University outside Tel Aviv, said that the report might just be a way for domestic critics of the current US policy to “let off steam”.

He praised the recommendation to move American troops into a peripheral role in Iraq, “because there is nothing else they can do”.

He said reducing American casualties might preserve what is left of US influence in the region.

Akiva Eldar of the Haaretz daily said that despite the recommendation that the US should talk to Syria and Iran, they “have no interest in helping the US leave Iraq easily without paying a political price”.

He called the recommendations “predictable”, but the parties are not ripe for such progress.

“The basic conditions do not exist to allow the US to use an agreement between Israel and the Arabs as a vehicle”.

John Howard, the Australian prime minister, said on Thursday that US-led forces should withdraw from Iraq only when it is a stable democratic nation.

Howard is a key supporter of George Bush’s Iraq strategy.

“In simple terms, the coalition wants to withdraw but it should only withdraw if it is satisfied that a stable, defendable Iraq can be left behind,” Howard said.

“For the West to pull out of Iraq in circumstances seen as defeat, would deliver an enormous boost to terrorism in the region and around the world, and would be a huge blow to American prestige, and that would have bad consequences for Australia.

“I think we need a strategy that makes certain that we don’t leave behind an outcome that is a victory for the terrorists and we leave behind [an] Iraq that has an opportunity as surviving as a democratic nation.”

In the US, too, reaction was hardly uniform. Heather Wilson, a Republican member of the House select committee on intelligence, said: “Their recommendations range from the blindingly obvious, to the naive and simplistic, to the interesting but underdeveloped.”

Anthony Cordesman, a military analyst who holds the Arleigh A Burke Chair in Strategy at the Centre for Strategic and International Studies, described it as “an elephant gives birth to a mouse”.

“We wasted three years so what are we going to do, demand instant success now?” he said. “One of the problems we have here is having sent the bull in to liberate the china shop, we are now blaming the china shop for breaking the china.”

Josh Rushing, Al Jazeera’s military analyst, said that the report set aside a portion which is called “a new diplomatic offensive”, which he said pertains to the Arab-Israeli conflict.

Rushing said: “This area of the report is significant because for once they are making a linkage between events in Iraq within a wider regional context.

“The US is seeing that they can not get support from key Arab allies unless they fulfill key critical issues that are important to these allies. If Syria agrees to co-operate in Iraq and in Lebanon, the report suggests that Syria will get the occupied Golan Heights back. This is a significant suggestion.”

Speaking to Al Jazeera, Nir Rosen of the New American Foundation said that there was one thing all parties could agree on and that was that the US military cannot win the war in Iraq.

He said: “It has to be won by the Iraqi government and Iraqi politicians, not the US military.” 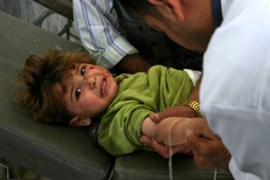 At least 75 Iraqis killed across the country as violence continues.

Approval comes on a day the Iraq Study Group advises a new approach in Iraq. 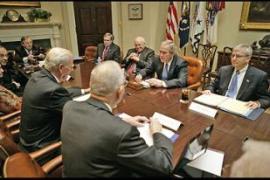 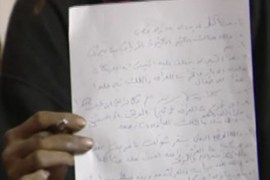 Iraqis give their recommendations

An ordinary Iraqi family writes down their recommendations for the US.