Meles Zenawi, prime minister of Ethiopia, said his country had already suffered attacks by groups working closely with Eritrea and the Islamic Courts forces in Somalia.
He said: “The jihadists in the Union of Islamic Courts, in collaboration with Eritrea, have already invaded Ethiopia by smuggling in rebel groups whom they trained and armed … to destabilise and create upheaval in the country.”
Ethiopian troops killed

On Thursday the Islamic Courts claimed to have blown up an Ethiopian military truck near Baidoa in Somalia, the headquarters of the country’s transitional government.

Fighters targeted a government convoy, possibly with a remote-controlled bomb, blowing up one of the vehicles, close to a camp where Ethiopians were training troops loyal to the transitional government.
Sheikh Mukhta Robow, deputy defence chief for the Union of Islamic Courts, said: “In praise of Allah, our holy warriors succeeded and destroyed a truck carrying troops. I’m not sure how many were killed, but all who were on board were blown up.”
Sources have said around 20 Ethiopian troops were killed in the attack, but the claims could not be independently verified and one Somali government official denied the attack took place.
Later a suicide car bomb was also reported to have exploded at a government checkpoint outside Baidoa.
The attacks came a day after the Islamic Courts accused Ethiopia of shelling a Somali town.
Arms embargo
On Wednesday, the UN security council condemned what it called a “significant increase” in the flow of weapons to Somalia in violation of a 1992 arms embargo.
The Union of Islamic Courts and the Ethiopian-backed transitional government are vying for control of Somalia, and many analysts fear that it could escalate into a regional conflict.
Both Ethiopia and Eritrea have been accused of violating the 14-year-old arms embargo on Somalia.
The US is consulting the UN Security Council members on a resolution that would lift the arms embargo for a regional peacekeeping force to help promote dialogue between the transitional government and the UIC.
However, the Islamic Courts movement is opposed to foreign intervention in the country and has declared a holy war on Ethiopia over incursions into its territories.
Ethiopia says it just has a few hundred military trainers in Somalia but a report commissioned by the UN suggests between 6,000 and 8,000 Ethiopian troops are in or near Somalia’s border.
The report also said 2,000 troops from Eritrea are inside Somalia supporting the Islamic Courts.
Source : News Agencies 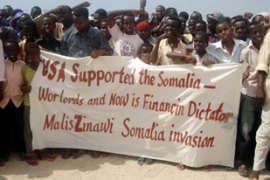 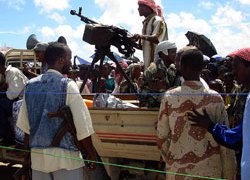