Israeli leaders says the operation in northern Gaza that began on Friday is aimed at halting rocket attacks on the Jewish state and called for increased efforts to halt the missiles.

Both shootings were confirmed by the Israeli army, who said the two Palestinians were armed.

Three soldiers were wounded in that clash, a spokesman for the Israeli army said.

Najwa Khaluf, 25, was injured on November 7 when an Israeli missile hit a school bus in the north Gaza town of Beit Lahiya. Three boys were also killed in the strike.

This brings to 5,569 the number of people killed since the outbreak of the second intifada, or uprising, in September 2000, the vast majority of them Palestinians, according to an AFP count.

The latest violence comes a day after Israel the UN General Assembly passed a resolution urging an immediate end to all acts of  violence by Israelis and Palestinians, including Israel’s offensive in the Gaza Strip.

Meanwhile, Palestinian leaders met a key candidate for prime minister in Gaza on Saturday, suggesting that progress was being made toward naming a unity government that could overcome a Western aid blockade, officials said.

It was the first time Mahmoud Abbas, the Palestinian president, and Ismail Haniyeh, the prime minister, had met Mohammed Shbair since he agreed last week to be nominated to head a joint government.

The leaders did not make any statements after the hour-long meeting held at Abbas’s office in Gaza, where they had been expected to exchange views on policy issues.

However, Abbas’s adviser Nabil Abu Rdainah told Al Arabiya television after the talks that he hoped talks for a unity government would be concluded later this month. A Hamas official had said the same earlier on Saturday.

Shbair, 60, a former head of the Islamic University in Gaza, is seen as close to Hamas. Though he has agreed to be named, Shbair has not yet been formally nominated as prime minister.

Palestinian negotiators have made progress on other fronts towards piecing together a unity coalition, having agreed to divide up 24 ministries. But they have yet to decide on which portfolios each party would hold, officials have said.

Palestinians have sought to put together a unity government to help end a Western aid boycott on the Hamas-led coalition elected last January.

Syria criticised Israel on Saturday for rejecting the plan, although there has yet been no official reaction to it.

However, the head of parliament’s foreign affairs committee, Tzahi Hanegbi, said the initiative would deprive Israel of the ability “to strike terrorist infrastructure” in Gaza.

Despite the vote, Israeli leaders continued calls to step up the offensive.

On Saturday, Avigdor Lieberman, the newly appointed minister of strategic affairs, said Palestinian leaders including Haniya and Mahmoud al-Zahar, the foreign minister, should be targeted.

“Mahmoud Zahar and Haniya should no longer be able to move freely. They and their belongings should be attacked,” he said. “All must disappear and go together to  paradise.”

Lieberman heads Yisrael Beitenu, a party Olmert added to his coalition to shore up support after criticism of his handling of a campaign against Hezbollah in Lebanon in July and August.

Meanwhile, around 200 peace activists demonstrated on Saturday at the Erez border crossing between Israel and Gaza, demanding a ceasefire and new talks with the Palestinians.

In Saudi Arabia, members of the Organisation of the Islamic Conference pledged to “break the blockade” that has crippled the Palestinian economy since Hamas came to power in March, although they did not give details on exactly how this would be achieved. 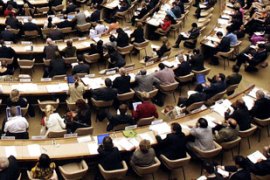 A UN resolution calls for an end to violence in the Gaza Strip. 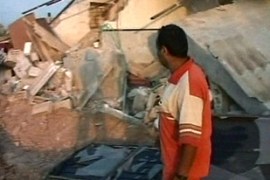 A Palestinian fighter’s home in Gaza is destroyed in an Israeli air raid.