Alvarez, 65, and Mitat, 64, both pleaded guilty in September in a plea-bargain deal that included dismissal of five other criminal charges.
A search at an apartment complex revealed more weapons and thousands of rounds of ammunition.
Airliner bombing
Another arms cache was found in the Bahamas, including C-4 plastic explosives, that prosecutors said was linked to Alvarez.
Defence lawyers said the men’s actions were comparable to risks taken by heroes of the American Revolution and anti-communist resistance figures such as Lech Walesa, the leader of the Solidarity movement in Poland who later became its president.
Robert Josefsberg, for the defence, said: “That’s why they did what they did. They are great patriots.”
However, the judge, James Cohn, said he recognised that the men’s goal was “a free and democratic Cuba” but that the serious nature of the crime demanded punishment.
“Nobody questions the underlying motives here,” Cohn said. “However, as we all know, we are a nation of laws. Sanctions must be imposed.”
Alvarez is a long-standing associate of Posada, a former CIA operative accused by Cuba and Venezuela of being responsible for the bombing of a Cuban airliner in 1976 that killed 73 people.
A judge has ruled that Posada, currently in immigration custody in Texas, must be deported to a country other than those two, but the US cannot find one to take him.
Source : News Agencies 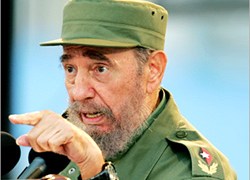 US authorities have rejected Venezuela’s request to extradite Luis Posada Carriles to face charges he bombed a Cuban airliner in 1976.

US asked to hand over Cuban exile

If the US extradites a Cuban exile wanted in a 1976 airliner bombing, he would not be turned over to Cuba but would remain in Venezuela to face justice, Venezuela’s vice president says.