SpaceX’s first private flight has been launched into orbit with two contest winners, a healthcare worker and their rich sponsor on board, the most ambitious leap yet in space tourism.

The launch on Wednesday night was the first time a spacecraft circled Earth with an all-amateur crew and no professional astronauts.

The Dragon capsule’s two men and two women are looking to spend three days circling the planet from an unusually high orbit – 160km (100 miles) higher than the International Space Station – before splashing down off the Florida coast this weekend.

It is SpaceX founder Elon Musk’s first entry in the competition for space tourism dollars.

Isaacman is the third billionaire to launch this summer, following the brief space-skimming flights by Virgin Galactic’s Richard Branson and Blue Origin’s Jeff Bezos in July. Only 38, Isaacman made his fortune from a payment-processing company he started in his teens.

Joining Isaacman on the trip dubbed Inspiration4 is Hayley Arceneaux, 29, a childhood bone cancer survivor who works as a physician assistant where she was treated – St Jude Children’s Research Hospital in Memphis, Tennessee. Isaacman has pledged $100m out of his own pocket to the hospital and is seeking another $100m in donations.

Arceneaux became the youngest American in space and the first person in space with a prosthesis, a titanium rod in her left leg.

Also along for the ride are sweepstakes winners Chris Sembroski, 42, a data engineer in Everett, Washington, and Sian Proctor, 51, a community college educator in Tempe, Arizona.

Once opposed to space tourism, NASA is now a supporter.

“Low-Earth orbit is now more accessible for more people to experience the wonders of space,” tweeted NASA Administrator Bill Nelson, who was a congressman when he hitched a ride on a space shuttle decades ago. 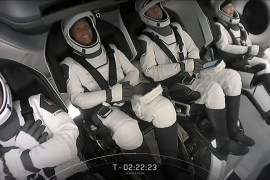 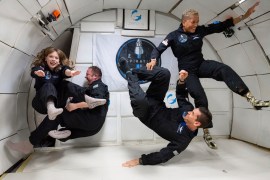 It is the first time in 60 years of human spaceflight that no professional astronaut is aboard an orbit-bound rocket.