The opening ceremony of the Tokyo Olympics took place on Friday in a nearly empty stadium after a year-long pandemic postponement and a build-up marred by scandal and controversy.

The curtailed celebration began with a video showing athletes training at home during the pandemic before fireworks burst into the air above the Olympic Stadium.

Just a few hundred officials and dignitaries were in the stands of the 68,000-seat venue, including French President Emmanuel Macron, US First Lady Jill Biden, and Japan’s Emperor Naruhito, who declared the Games open.

The Olympics have faced opposition in Japan over fears the global gathering of 11,000 athletes could trigger a super-spreader event. The event is taking place under strict virus measures.

Overseas fans are banned for the first time in the history of the Games, and domestic spectators can only watch events at a handful of venues.

Inside the stadium, on Friday, fireworks erupted off the arena’s roof and music blared from its loudspeakers, but the tone for much of the ceremony was sombre, including during an opening number when performers mimicked athletes training in isolation.

Tennis star Naomi Osaka concluded the ceremony by lighting the Olympic cauldron atop a peak inspired by Mount Fuji. 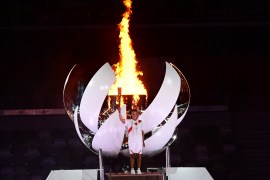 Opening ceremony marks beginning of summer games delayed for a year and held under unprecedented restrictions. 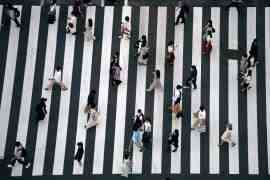 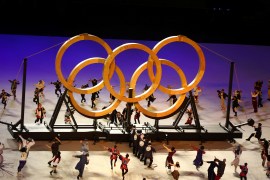