Thousands of Cubans marched on Havana’s Malecon promenade and elsewhere on the island to protest against food shortages and high prices amid the coronavirus crisis, in one of Cuba’s biggest ever anti-government demonstrations.

Many young people took part in the protest on Sunday afternoon in the capital, which disrupted traffic until police moved in after several hours and broke up the march when a few protesters threw rocks.

Cuba is going through its worst economic crisis in decades, along with a resurgence of coronavirus cases, as it suffers the consequences of US sanctions imposed by the Trump administration.

An official in the Biden administration tweeted support for Sunday’s demonstrations.

“Peaceful protests are growing in #Cuba as the Cuban people exercise their right to peaceful assembly to express concern about rising COVID cases/deaths & medicine shortages. We commend the numerous efforts of the Cuban people mobilising donations to help neighbours in need,” tweeted Julie Chung, acting assistant secretary for state for Western Hemisphere affairs.

Cuba’s director-general for US affairs, Carlos F de Cossio, dismissed her remarks in his own tweet: “US State Department and its officials, involved to their necks in promoting social and political instability in #Cuba, should avoid expressing hypocritical concern for a situation they have been betting on. Cuba is and will continue to be a peaceful country, contrary to the US.”

The demonstration grew to a few thousand in the vicinity of Galeano Avenue and the marchers pressed on despite a few charges by police officers and tear gas barrages. People standing on many balconies along the central artery in the Centro Habana neighbourhood applauded the protesters passing by. Others joined in the march.

Although many people tried to take out their cellphones and broadcast the protest live, Cuban authorities shut down internet service throughout the afternoon.

About two and a half hours into the march, some protesters pulled up cobblestones and threw them at police, at which point officers began arresting people and the marchers dispersed.

“The people came out to express themselves freely, and they are repressing and beating them,” Jorge Luis Gil, a Roman Catholic priest, said while standing at a street corner in Centro Habana. 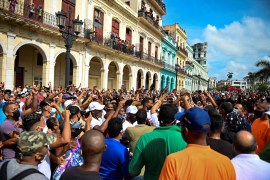 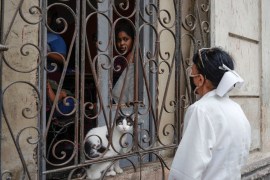 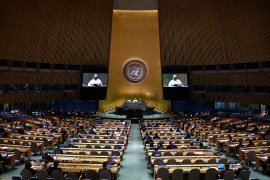 The vote, backed overwhelmingly, was the 29th time the General Assembly voted to condemn the 60-year-old embargo. 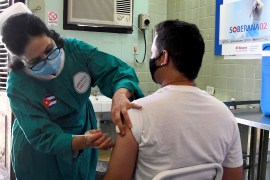