Mohammed al-Deif Adham al-Safadi was born just before dawn on Thursday in Gaza City, bringing much-needed joy to his family.

“I hope he will bless our lives with his presence. He has already filled us with so much happiness,” Hiyam al-Safadi, his 48-year-old grandmother, told Al Jazeera in a telephone interview.

Mohammed’s grandparents, parents, and his older brother were displaced from their home after Israel launched air raids on the besieged Gaza Strip on May 10 after Hamas, the Palestinian group which controls the territory, fired rockets into Israel.

At least 230 people have been killed in Gaza since Israel started its bombardment of the territory, including 65 children. Israel has reported 12 people, including two children, killed in rocket attacks carried out by armed groups in Gaza.

According to the United Nations, more than 72,000 people have been displaced in Gaza since the violence escalated.

The al-Safadi family home is located close to Israel’s fence in the northern Gaza Strip and they fled to the UNRWA-led Gaza al-Jadeeda school in Gaza City due to the intensity of the aerial bombardment.

“We haven’t been able to go back,” Adham al-Safadi, Mohammed’s father said. “It’s too dangerous and there are no safe places to go to.”

Ansam al-Safadi, Mohammed’s mother, said she never thought she would welcome her baby boy in a classroom inhabited by other families.

After giving birth at the al-Awda Hospital, Ansam was back at the school a few hours later.

“It’s a tough situation to be in,” she said. “The end of my pregnancy was marked with a state of fear and panic. Here, there is no privacy, and we don’t even have a crib for Mohammed.”

Nevertheless, the baby has brought new hope for the family.

“We were very upset when we left our homes, but today, we are happy because of this child which God has given to us under these difficult circumstances,” Hiyam said. 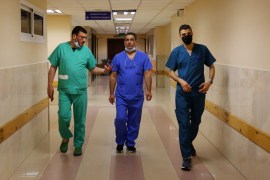 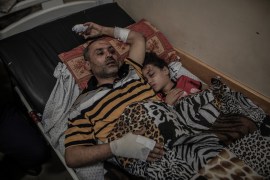 Palestinians share their stories of survival and loss from Israel’s 10-day bombardment of the Gaza Strip. Eyad Salha, his wife Amani, and their daughter Nagham were getting ready to eat lunch when a missile struck their home.