Thousands of people have taken to the streets across Russia’s vast expanse to demand the release of jailed opposition leader Alexey Navalny, keeping up a wave of nationwide protests that have rattled the Kremlin.

The police detained more than 5,000 protesters in cities across Russia’s 11 time zones, according to OVD-Info, a group that monitors arrests.

The authorities had prepared a massive effort to stem the tide of demonstrations on Sunday after tens of thousands of people rallied across the country last weekend in the largest and most widespread show of discontent Russia has seen in years.

The 44-year-old Navalny, an anti-corruption investigator who is the best-known critic of President Vladimir Putin, was arrested on January 17 upon returning from Germany, where he spent five months recovering from alleged nerve-agent poisoning that he blames on the Kremlin.

Russian authorities have rejected the accusations. 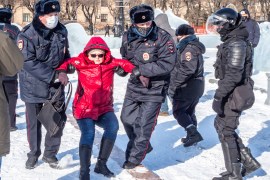 Police ramp up pressure on the opposition with mass arrests as Alexey Navalny allies gather for new protests. 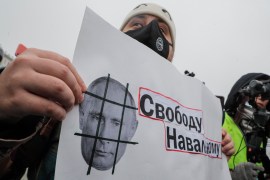 Russians demand the release of Alexey Navalny in unprecedented protests that stretched across the vast country. 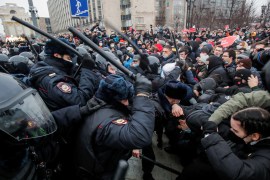 Spokesman for Vladimir Putin says Russian president open to talking to Joe Biden after US slams crackdown on protesters.