Jubilant Americans celebrated the election of Joe Biden and Kamala Harris as the nation’s next president and vice president – honking horns, cheering and dancing in the streets across the United States.

Supporters of President Donald Trump and Vice President Mike Pence turned out to express their disapproval and to back the president, who has not conceded and vowed a legal fight.

After Pennsylvania became the state that put Biden over the 270-vote threshold in the Electoral College, impromptu street parties broke out from Philadelphia to New York to Harris’ hometown of Oakland, California, where supporters in face masks held up campaign signs beneath a theatre marquee reading “Every vote must be counted.”

In Washington, DC, crowds rallied in the recently redubbed Black Lives Matter Plaza just steps from the White House and the site of large protests against racial injustice earlier this year. Outside Vaughn’s Lounge in New Orleans, revellers bathed in a champagne shower.

The mood was grim among Trump backers near the Michigan Capitol in Lansing, where a woman in a campaign T-shirt held up a crucifix, a glum expression on her face. In North Las Vegas, outside the local elections department offices, an armed supporter of the president raised a defiant fist in the air as red, white and blue Trump flags fluttered.

There were also pro-Trump demonstrations from Atlanta to Philadelphia. The latter, like some other cities, saw people from opposite camps come face-to-face, leading to some shouting and arguing back and forth. 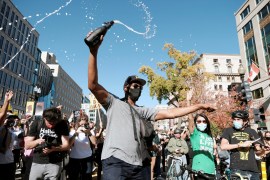 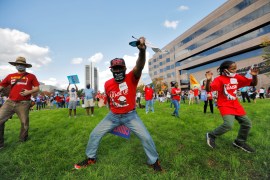 Tens of thousands of Americans take to the streets after Joe Biden projected to win the US presidency. 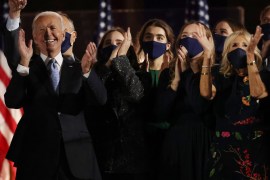 President-elect outlines his policies after winning the US election over incumbent Donald Trump.