In his off-hours, the Australian paediatric nurse turns his attention to an equally defenceless group: unwell koalas.

“They really run the risk of becoming extinct inside our lifetime,” Philpott said of the New South Wales koala population while helping a veterinarian treat a rescued koala infected with the bacterial disease, chlamydia.

The pervasive infection among the koalas, blazing bushfires, drought, logging of forests and urban encroachment of their habitat are some of the many destructive forces that continue to threaten their survival.

A government report warned in June that these forces could make Australia’s symbolic animal extinct in New South Wales – the nation’s most populous state – by 2050.

The country’s worst summer of bushfires in a generation razed more than 11.2 million hectares (27.7 million acres), nearly half the area of the United Kingdom, thrusting the grey, tree-hugging marsupials into the centre of the national conversation and a hot political issue.

In New South Wales, at least 5,000 koalas were killed in the fires that burned 80 percent of the Blue Mountains World Heritage Area and 24 percent of koala habitat on public land, the government’s report said.

As another summer looms, koalas face the threat of more bushfires, although weather forecasters expect a wetter, cooler few months than in the previous year. 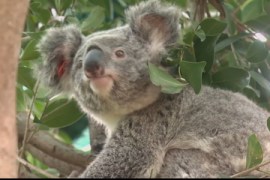 Australia koalas ‘on verge of extinction’

MPs say koalas will become extinct in New South Wales within 30 years unless urgent action is taken to protect them. 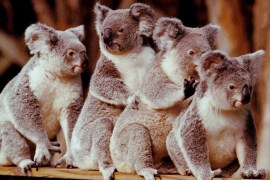 Dozens of koalas dead after logging at Australian plantation

Conservation watchdog will investigate incident, which came to light after residents saw koalas ‘bulldozed’ into piles. 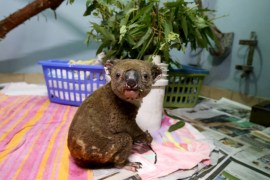 Up to 30 percent of koala habitat has been destroyed in wildfires, environment minister says.