The Mexican government removed a prominent bronze statue of Christopher Columbus and surrounded another with high metal fencing before the annual protest to mark the explorer’s arrival in the Americas in 1492.

Authorities said it was taken away for restoration work on Saturday but added that it was also time for reflection about Columbus’s legacy, triggering speculation in Mexican media that the statue may not be returned.

Meanwhile, in Colombia, thousands of Indigenous people demonstrated in the city of Cali demanding an end to violence.

The southwest of Colombia that borders Ecuador and the Pacific has a large Indigenous population and is one of the worst affected areas by a wave of violence that has resulted in at least 42 massacres this year, according to the United Nations.

In Chile’s capital Santiago, hundreds, including other Indigenous tribes, converged on a central square for a demonstration dubbed “Mapuche resistance”.

Clashes broke out with police as some people wearing hoods smashed bus stops and road signs and threw stones at security forces, who responded with tear gas and water cannon.

Some two million Chileans, or 10 percent of the population, identify as Indigenous. The Mapuche are the largest Indigenous group.

In recent years, relations between the Chilean government and the Mapuche have become increasingly fraught because of mining and logging on land which the group claim as its own. 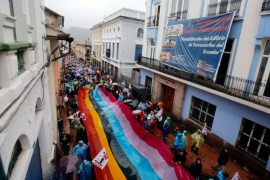 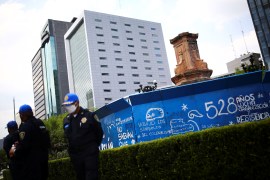 Authorities say it was taken away for restoration work but added it was also time for reflection on Columbus’s legacy. 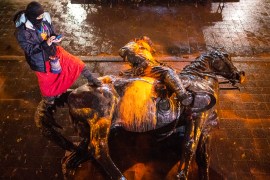 Demonstrators topple statues of former presidents at Indigenous Peoples Day of Rage event in US state of Oregon.