As commuters struggle to reach their offices, many parts of the UK remain under a blanket of thick snow.

Up to 30 centimetres of snow accumulated in Wales, with the Midlands and northern and eastern England also seeing generous snowfall.

The wintry weather briefly suspended flights in Birmingham, London Stansted and Luton airports, and more than 150 flights were cancelled from Heathrow.

Other parts of Europe also suffered from severe weather, with a storm called Ana bringing strong winds to Spain, Portugal, France and the Alps.

The strong winds then moved northeast, with gusts as high as 161km/h reported in western France, near La Rochelle.

In northern France, a ferry with more than 300 people on board ran aground in Calais harbour as it tried to leave during the storm.

Meanwhile, the Alps has seen heavy snow over the past few days, and now Ana is bringing strong southerly winds to the region.

This will bring heavy rain and snow to the southern parts of the Alps and very warm air to the north.

This is likely to cause a big thaw in places which could trigger flash floods. 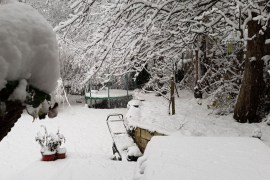 Heavy snow, freezing fog and gale force winds in the UK – luckily not all in the same place.