Washington DC – The US capital saw half a million protesters on Saturday following President Trump’s inauguration join the Women’s March on Washington. Locals and visitors alike saturated city streets chanting “Welcome to your first day – we will not go away” and other slogans in numbers that forced the route to change from its planned path. The march organisers had originally applied for a 200,000-people permit, but said nearly half a million attended the march.

The mission statement and core values of the Women’s March evolved as the date drew near with the help of grassroots input and a dynamic group of conference organisers to centre on intersectional feminism, and include in their call “Muslims and those of diverse religious faiths, people who identify as LGBTQIA, Native people, black and brown people, people with disabilities, survivors of sexual assault”.

Anna Szymczak, 29, from Chicago, spoke for what many of those marching felt. Walking past the Trump Hotel and making an obscene gesture, she said: “I came to show solidarity with women and all the other people who resist the bigotry and the intolerance that the Trump administration represents.

“… I think solidarity and letting people know, letting the administration and the politicians know that we’re watching, that we’re going to hold them accountable and that when it comes time for the revolution we will come out.” 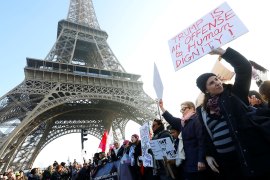 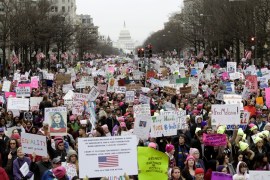 Hundreds of thousands march in US capital as solidarity protests take place in cities across Europe, Asia and Africa.