The unmaintained facility, which lies inside rebel-held territory, is slowly rotting and leaking toxic oil into the earth.

According to rebel soldiers stationed in the area, international employees deserted the oilfield in August 2013, four months before civil war broke out in South Sudan.

Researchers from German aid group Sign of Hope and water drilling experts African Water Ltd have released the results of an extensive investigation showing that drinking water sources for at least 180,000 people in Unity state have been contaminated by oil exploration and production here.

Wells dug for communities contain water with salt levels so high that it is undrinkable. Abnormal heavy metal deposits such as lead and zinc were also found in the water supply.

The investigation found no natural source for the salt levels and presence of heavy metals in the water supply. The researchers attribute the contamination to oil extraction activities and poor waste disposal procedures.

Villagers cannot use their contaminated wells and instead are sourcing water from swamps and rivers, increasing the risk of catching deadly water-borne diseases.

Currently, rebel officials say the government and oil companies have no presence at these oilfields and safe drinking water sources for the population are disappearing.

More on the story 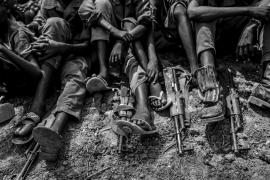