By
Patrick Strickland and
Ezz Zanoun

Gaza City – At least 290 Palestinians have been wounded by Israeli forces in the occupied Palestinian territory while marking a “Day of Rage”, according to the Palestinian Red Crescent.

At least 66 of those injured on Friday during clashes in the occupied West Bank, including East Jerusalem, and the Gaza Strip were hit by live ammunition or rubber-coated steel bullets, the group added.

Israeli authorities also lifted restrictions on Friday that had banned men aged under 40 from visiting the flashpoint Al-Aqsa Mosque compound in Jerusalem – a move seen as a bid to ease Muslim anger.

Elsewhere, however, Israeli soldiers injured dozens of Palestinians  – among them three journalists – during clashes outside the Nahal Oz military base in the Shujaiya area, near the Gaza border. Witnesses told Al Jazeera that the soldiers fired live ammunition, tear gas and rubber-coated steel bullets.

Yehya Kareera, 20, also died on Friday afternoon, succumbing to a gunshot wound inflicted by Israeli troops a week earlier during protests on the Gaza border.

Speaking to Al Jazeera, Hamas leader Fathi Hamad said that his organisation was in favour of an Intifada.

“We support and stand behind the Intifada [uprising].”

Protests have spread throughout the Palestinian territories and Israel since being triggered last month by Israeli incursions into the Al-Aqsa Mosque compound.

Since the beginning of the month, Israeli forces or settlers have killed at least 53 Palestinians, including unarmed demonstrators, bystanders and suspected attackers.

At least eight Israelis have been killed during shooting or stabbing incidents allegedly carried out by Palestinians.

Mukhaimer Abu Saada, a political science professor at Gaza’s al-Azhar University, said that the protests throughout the Palestinian territory were driven by young people who “don’t care what the political leadership says, who don’t care what Abu Mazen [Palestinian President Mahmoud Abbas] says”.

“Youth [in Gaza] feel hopeless and helpless,” he told Al Jazeera, explaining that three Israeli wars and the eight-year Israeli blockade of Gaza have left much of the territory in ruins.

For the last three weeks, clashes between Palestinian protesters and Israeli forces on the heavily militarised Gaza border have increased in frequency.

Of the Palestinians killed so far this month, 16 of them were in Gaza.

Along with three other demonstrators, Hussam al-Din Dowleh’s 24-year-old son Shadi was shot dead by Israeli soldiers during a protest on the Gaza border near Nahal Oz on October 9.

“I was at home when I found out,” he told Al Jazeera. “I got a call that he was injured in the hospital. When I arrived the doctors were trying to revive him, but I knew my son was gone.”

“I knew that I’d never see him again, that I wouldn’t see him finish school or get married,” Dowleh recalled. “Believe it or not, I had a bad feeling and expected bad news. This is our life as Palestinians.” 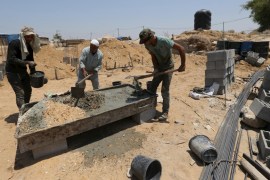 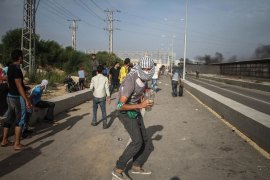 ‘Until the last breath’: Gaza protests on border

Palestinians protesting against Israel say they will not back down, even after several people are killed. 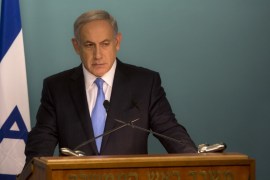