The recent attacks on the United Arab Emirates by Houthi missiles and drones have highlighted the vulnerability of city states with economies reliant on sprawling energy infrastructure, huge international hub airports and a largely expatriate workforce.

The UAE, part of the Saudi Arabia-led military coalition fighting the Houthis in Yemen, already has one of the most potent air defence systems in the region, relying mainly on American-made weapons like the older HAWK missile, the more capable Patriot PAC-3 missile and the THAAD air defence system which was used for the first time in combat this year, destroying a Houthi missile.

These missile batteries are stationed at strategic points, protecting airports, oil and gas plants and military bases. While these defence systems are capable, Houthi attacks still made themselves felt in Abu Dhabi, damaging its airport and a fuel depot, and killing three people.

With its renewed involvement in the war in Yemen, which the United Nations estimates has killed 377,000 people as of the end of 2021, the UAE can expect more attacks of this nature. The Iran-backed Houthis, also known as Ansar Allah, are losing ground in the war as UAE-backed militias capture more and more territory, pushing the Houthis further back.

So what defence systems has the UAE bought and why?

Focusing on a multi-layered air defence, the UAE has opted mainly to buy South Korean and Israeli missiles, as well as keeping most of its US-made weapons. The Hawk missile, first entering service in 1959, is now close to obsolescence, despite numerous upgrades. The South Korean Cheongung 2 medium-range surface-to-air missile will fill that gap, as well as existing Patriot batteries.

In its largest arms export deal in history, South Korea agreed with the UAE to sell $3.5bn worth of these advanced missiles, along with accompanying radars. The agreement also included promises of closer cooperation in missile development between the two countries. The Cheongung 2 missile is partly based on the highly capable Russian S-400 and is able to engage multiple targets at once with a range of 40km. It is also highly resistant to electronic jamming.

Despite the size of the South Korean deal, Israel could stand to become the winner in this weapons procurement drive by the UAE. The Emirate has entered into discussions with Israel on buying either the Barak 8 or Spyder air defence missile systems. The first South Korean weapons will only start to arrive in 2024 and the UAE is looking to the Israeli systems as a stopgap.

The advanced Barak 8 has also been bought by the Indian military and Azerbaijan was reported to have used a Barak 8 to shoot down an advanced Iskander missile, launched by Armenia in the 2020 war between the two countries. The missile has a longer reach than its South Korean counterpart and can also destroy multiple targets simultaneously.

The majority of Houthi ballistic missiles have been intercepted successfully, yet many of their explosive-laden drones manage to get through and strike their targets.

In order to plug this critical gap in its air defence, the UAE is also in discussion with Israel to buy its Iron Dome system. This would provide an extra layer of defence against slower, low-flying drones and cruise missiles.

Added to this would be the increase in intelligence sharing as the two countries deepen security ties. The UAE, with its new, advanced, multi-layer missile defences would be able to act as an early warning system for any missile attack launched on Israel from Iran, giving Israel vital extra time for it to launch its own interceptor missiles. 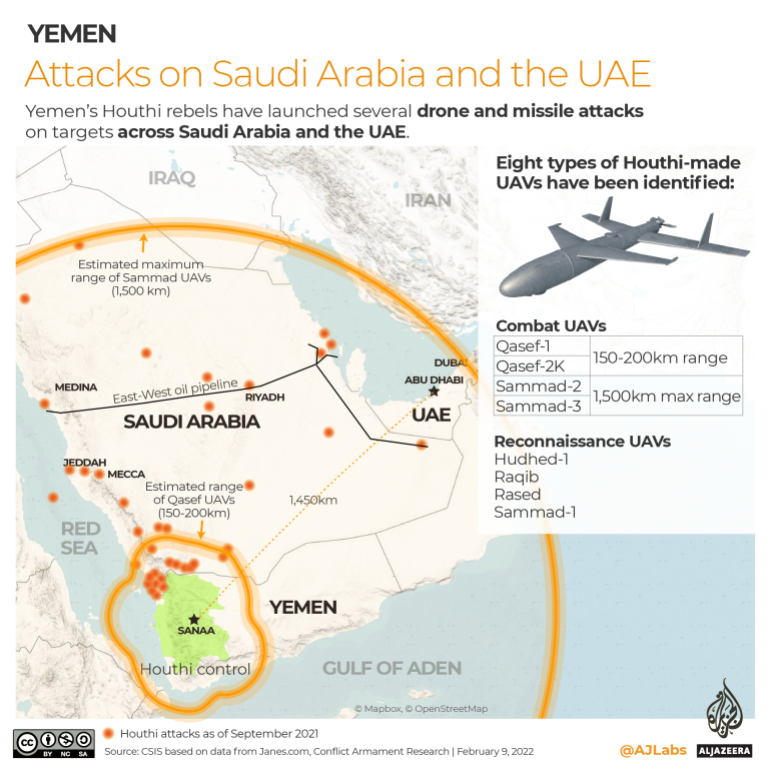 The UAE is not just looking to other countries for solutions; it has been boosting its domestic defence industry with billions injected into its own research and development programmes.

In 2021, Halcon, a precision-guided weapons supplier based in Abu Dhabi, unveiled SkyKnight, its new air defence system designed to destroy helicopters, unmanned aerial vehicles (UAVs) and rockets. It is short-range and designed to intercept targets out to a range of 10km, but in addition to the Iron Dome and its existing Russian Pantsir air defence system, this new multiple-layered defence network looks increasingly formidable.

The UAE has one of the most advanced air defence systems in the Gulf region. With these new advanced weapons, it will only improve each new layer of protection covering up gaps in the previous systems, making it far harder for any group or country to penetrate. Further use of sensor information from allies Saudi Arabia, the United States and Israel will provide an increasingly detailed picture of the battlespace, making incoming missiles and drones easier to spot and therefore destroy.

The UAE is not just looking to bolster its air defence. Its small yet well-trained air force is to receive a huge boost, as in December, France and the UAE announced the latter’s purchase of 80 advanced Rafale multi-role fighter jets. At $18bn, it is the largest ever French arms export deal.

According to the International Institute for Strategic Studies, or IISS, the UAE has 156 combat aircraft. The addition of 80 highly capable French-made Rafales will give the UAE a significant increase in combat power, shifting the regional balance of power further in its favour.

This will allow the UAE to further pursue its robust foreign policy, including the war in Yemen, safe in the knowledge that its most vulnerable sites, cities and airports will now be much safer from Houthi attacks.