London, United Kingdom – Marius Daniel Banceanu has a grand vision for greater recognition for his people, the Roma, but this month his gaze is fixed on a single, small box.

For the first time, in the 2021 census of the United Kingdom – an event that takes place every 10 years, Roma is included in the list of ethnic minorities.

Banceanu, a tireless campaigner and project advocate for the Roma Support Group, welcomes the update as an opportunity for the estimated 200,000-strong population, to “stand up and be counted” by ticking the box, which comes under the white ethnicity category.

“When authorities know that we are so many [in number], it will be their duty to offer the services we need,” Banceanu, who left Romania and settled in the UK five years ago, told Al Jazeera.

“We have been moving for hundreds and hundreds of years, and trying to adapt into societies, but now it’s time for society to understand us.”

In the UK, as in Europe, the Roma are among the most marginalised ethnic minority communities.

This deadline for people in the UK to complete the survey, which can be answered by hand and submitted via post or completed online, is Sunday.

Banceanu played a key role in this year’s event by helping the Office for National Statistics, which carries out the count, to write census scripts in Romany languages.

He also made social media-friendly explainer videos and encouraged members of the community, who were hesitant to participate because of past discrimination, to complete their forms.

‘Roma people are here to stay’

The census is effectively a headcount which is used to inform decisions on which services are needed, by whom, and where.

Its findings affect everything from healthcare provision and education financing, to shaping where new houses are built and which roads get upgraded.

For the Roma, who are more likely to experience poor health, education and housing, as well as worse employment outcomes, participation is critical, campaigners say.

“We cannot advocate for services if we cannot prove people are out there,” Patricia Stapleton, policy manager for The Traveller Movement, a charity that promotes inclusion for Gypsy, Roma and Traveller people, told Al Jazeera.

The Traveller Movement has also been encouraging people to register their ethnicity in the census.

Much of the work is focused on explaining the importance of the census, either online or in person.

But attention is also being paid to supporting people through the process of filling out the survey before this weekend’s deadline.

“We’re really encouraging people to tick the box,” Stapleton said. “It [the census] gives us a chance to move forward and get all the things we need … and it’s also an opportunity for people to take ownership of their identity and to take pride in their ethnic heritage.”

Stapleton said that after the count, the government should address the issues faced by the Roma, Gypsy and Traveller communities with a cross-departmental approach backed by “proper funding and proper monitoring”.

“All of that is really, really important,” she said.

Roots in the Indian subcontinent

The term Roma is commonly used throughout Europe to describe a variety of historically itinerant communities with distinct languages, cultures and religions.

In the UK, policymakers and researchers have typically drawn distinctions between these diverse minority groups using three umbrella terms – Gypsy, Roma and Traveller, or GRT for short.

In this context, Gypsies are broadly understood to be people of Romany origin who have been present in England since at least the 16th century after migrating in large numbers from the Indian subcontinent to Europe in the late middle ages.

Roma are considered to be those who, while also having ancestry stretching back to the Indian subcontinent, migrated to the UK much more recently from Eastern and Central European countries – from 1990 onwards.

Travellers are distinguished as traditionally nomadic people of Irish origins.

Although it did not include Roma, the last census, in 2011, did recognise Gypsies and Travellers for the first time.

It recorded 58,000 such people living throughout England and Wales, accounting for approximately 0.1 percent of the combined population of both countries. Northern Ireland and Scotland conduct their own censuses.

Officials acknowledged the numbers were likely an undercount, with the actual Gypsy and Traveller population estimated to be up to 300,000-strong.

Overall, research indicates there may be half a million or more GRT people across the nation.

‘Roma people are here to stay’

Participation in the census is mandatory by law – though some questions are optional – and the personal information gathered in each survey is kept confidential to the public for 100 years.

But according to Stapleton, there is some misunderstanding and apprehension over the count among some sections of the Roma community.

Many have deep-seated reservations about identifying themselves because they believe there could be negative consequences for doing so.

Banceanu said some were scared to say “I’m Roma” as a result of past prejudice, which has seen many discriminated in the job market or, as some claim, denied access to rented accommodation because of their ethnicity.

“They will not tick the box if they don’t understand this is an opportunity,” he said.

“So when I talk to them, I illustrate the fact that we are important and we have to be counted, and proud of who we are.”

Ilsa Mogensen, a campaigner for the Roma Support Group, said she hoped high engagement would help establish the community as “part of the fabric of UK life”.

“It’s partly about getting people the help they need, but it’s also about establishing that Roma people are here to stay,” she told Al Jazeera.

‘There are blind spots’

There is undeniable evidence that the Roma are discriminated against.

Life expectancy among GRT people is about 10 years lower than that of the general population, while they also have the lowest rate of economic activity of any ethnic group, according to a UK Parliament 2019 report aimed at tackling inequalities.

GRT children disproportionately struggle in school and have the lowest average level of attainment.

Campaigners suggest the widening of the census’ categories could help call attention to those overarching issues, but also the unique and pressing needs of each community grouped under the GRT banner.

“It’s important to identify how these different groups face different forms of exclusion … and to separate data so they [policymakers] can more accurately see the needs of different communities,” Jonathan Lee, spokesman at the Brussels-based European Roma Rights Centre, told Al Jazeera.

For example, while Romany Gypsies and Travellers need better access to housing sites, this is not an issue shared by the Roma.

“For Roma, there are blind spots on things such as school places … language and housing needs,” Lee said, adding this group also needs particular support regarding immigration following Brexit.

“They’ve never had a nomadic culture, and the circumstances that they’re coming from are much worse than anything British Romany people have experienced – the living conditions, the access to education and the level of societal racism as well as discrimination from authorities in their home countries is significantly higher,” he said.

“It’s better in the UK, but there is still societal prejudice against what people would think of as Gypsies from Eastern Europe,” Lee added, citing rising hate crimes against the Roma and other minority groups after the divisive 2016 Brexit referendum.

‘Nothing can be decided about us, without us’

While the half a dozen campaigners and Roma Al Jazeera interviewed welcomed the census update, all said the current UK government and previous administrations could have already done more to address the issues the community faced.

“It is a privilege for us to have our box, but we shouldn’t be happy only with that,” Banceanu said. “Even though we are very proud of this, we have to do more.”

And as the coronavirus pandemic continues to reel, the need for action is more pressing given its “disproportionate” impact among the Roma.

Alunica Lepadatu, a spokeswoman for the Luton Roma Trust, an advocacy group in southeastern England, said the crisis had hit the Roma and other minority groups particularly hard.

“It has made everyone suffer in the UK, but our community and other vulnerable and disadvantaged communities suffered much more,” said Lepadatu, who hails from Moldova but has been resident in the UK since 2015.

Looking ahead beyond the census, she said Roma representation should be boosted across the UK’s political landscape to ensure the community receives the support it needs.

“Nothing can be decided about us, without us,” she said. “We have been fighting for inclusion for so many years in Europe in general, and our inclusion in the census is a small, positive step, but it’s still not enough.” 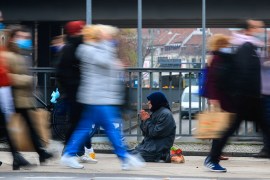 In 2014, authorities in Geneva fined a woman $563 for begging and arrested her when she was unable to pay. 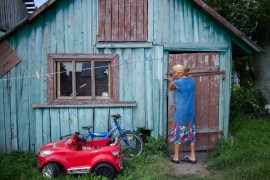 Residents of what was once the largest Roma settlement in the Baltics were ordered to demolish their homes and leave. 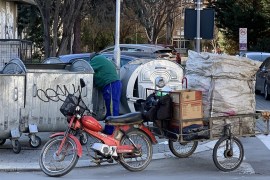 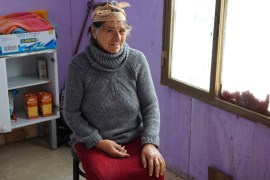 Following quarantine rules is near impossible for many Roma, who do not have financial backup or job security.