Stories from the life of Hajiya Gambo Sawaba, one of northern Nigeria’s most important female political activists, who was born on this day in 1933, have become the stuff of folklore.

According to one, her fighting spirit was evident when, as a young girl growing up in northern Nigeria in the 1930s and 40s, she would always intervene in other children’s fights on the side of the loser, telling them: “I have bought this fight from you”, before carrying on the scuffle.

The fights came frequently, and her clothes would inevitably get torn. So, the story goes, in order to minimise the frequency with which she would have to replace her daughter’s damaged dresses, Sawaba’s mother, Malama Fatima, resorted to making them out of tarpaulin.

Whether or not this particular story was true, there was no denying that throughout her life, Sawaba never shied away from a fight, particularly when it was on the side of the downtrodden.

In 1943, when she was 10 years old, her father died. Her mother died three years later and, soon after, at the age of 13, Sawaba was married to a second world war veteran named Abubakar Dan Sarkin. At 16, she gave birth to her only child, Bilikisu.

By the following year, her political activism had begun.

At the time, the British ruled over Nigeria using a system of Indirect Rule, whereby Native Authorities (NA) administered colonial policies in the 12 northern provinces through local emirs and district and village leaders.

NEPU supported “women’s education in both religious and secular spheres and their being given enough space – politically and economically”.

It was in sharp contrast to the NPC, which controlled the Native Authorities and whose leadership was quoted as saying: “We in the north are happy, our women are happy about their condition. There is not a single Northern woman who has told anyone that she is unhappy. We know what is right for women and our men know what is right for themselves.”

NEPU’s messages resonated with Sawaba’s sense of justice and she became an early member of the party’s women’s wing.

By this time, there were already calls for women’s voting rights in other parts of Nigeria – by the likes of the renowned feminists, Olufunmilayo Ransome-Kuti and Margaret Ekpo in the western and eastern regions of Nigeria, respectively. Sawaba would soon lend her voice to theirs.

Sawaba was not her birth name. Meaning freedom or redemption, it was given to her by her political mentor, Malam Aminu Kano, after she had been elected president-general of NEPU’s women’s wing.

Although folklore gives an alternative version of how she came by the name. According to this, she became known as Sawaba after attending a political rally at Jakara Market in Zaria. As the crowd waited for the official speaker, a male Zaria council member known as Alhaji Gambo Sawaba, she took to the stage to talk about voting and education rights for women.

When Alhaji Gambo Sawaba arrived, he announced to the audience that as she had been the first woman to address a political rally in the north, she would henceforth be known as Gambo Sawabiya – the feminine version of Sawaba.

If this version of the story is correct, Sawaba clearly preferred the male version as that is the one she stuck to. From then on, in Zaria’s political circles, people differentiated between the two politicians by saying: “Gambo Sawaba [male]; Gambo Sawaba [female].”

Whatever the truth behind her name, Sawaba became synonymous with the politics of freedom and emancipation in northern Nigeria, especially for women.

She openly advocated against child marriage, forced and unpaid labour and unfair taxes, and canvassed for jobs for women, education for girls and full voting rights.

Her husband’s family, however, were unhappy with her efforts to merge motherhood and political activism and an amicable separation soon followed. As was the custom at the time, her baby daughter was handed over to her in-laws.

But she had also attracted the ire of the authorities. As many women in the north followed the practice of purdah, a form of social seclusion, Sawaba went from house-to-house to speak to them. This displeased the Native Authority in Kano and, in 1952, she was hauled before the conservative Alkali (Magistrates) Court, on charges of “drawing out women who were in purdah”. The court sentenced her to three months in prison.

It was the first of 16 prison sentences she would serve during her lifetime. She was arrested so often, in fact, that she always kept a blanket with the words ‘Prison Yard’ inscribed on it nearby so that she could take it with her whenever the police came for her.

Later that year, the authorities in Kano ordered her to leave the city. To make sure she complied with the order, local law enforcement agents escorted her back to Zaria.

But she continued her political activism – and periods of imprisonment – in her hometown. As well as Zaira and Kano, she was also imprisoned in Kaduna and Jos.

According to the Daily Trust newspaper: “Whenever she was on trial, the courtroom was filled with her supporters.”

But it was not just jail time she endured.

The Daily Trust reported, “On two occasions she was stripped naked and given eighty lashes in Zaria Central Prison. She also endured the indignity and pain of having her hair shaved off with a broken bottle.”

In 1990, Sawaba’s political compatriot, the late Malama Ladi Shehu, told the First Nation Magazine about the abuses female political activists faced: “Gambo and some other NEPU women, very many of them who were imprisoned, had their hair shaven and were beaten up; and some of our members were even killed. Quite a number of them.”

But imprisonment did not stop Sawaba and other members of the women’s wing of the party campaigning for enfranchisement. In 1956, they marched to the office of the regional premier, Sir Ahmadu Bello, in Kaduna to demand the franchise for women in the north in future parliamentary elections.

The premier said he would consider it – but his pledge came to nothing.

Women in southern Nigeria had been granted a limited franchise in 1951. In 1954, the Eastern Region followed suit and the Western Region in 1959.

But, according to the book Imperialism and Human Rights: Colonial Discourses of Rights by Bonny Ibhawoh, in 1954, the ruling NPC in the Northern Region issued a statement saying: “Women would be given franchise, only in God’s time.”

Eight years later, during a debate in Nigeria’s Senate on voting rights for Northern women, Senator Wuraola Esan, one of the two women in the Senate and a representative from the Western Region, declared: “I daresay, God’s time may never come as far as franchise for women in the north is concerned.”

In his autobiography, Bello, who was assassinated during a military coup in January 1966, explained his stand on enfranchisement for Northern women: “I dare say that we shall introduce it in the end here, but – and this is important – it is so contrary to the customs and feelings of the greater part of the men of this Region that I would be very loth to introduce it myself. The education of women must reach a far greater strength, and the numbers of properly educated women must be increased to many times the present, before the vote would be used to full advantage.”

Sawaba did not forget his failure to grant women the right to vote and once declared that were it not “for the fact that women in the North were not allowed to vote or be voted for” she would have stood against him in his own constituency.

Northern women would eventually get the vote in 1976.

Sawaba, however, never achieved electoral success – either with NEPU or the two other parties she joined later on in her career.

In 1998, she announced her retirement, telling the New Nigerian newspaper: “Politics in the country has lost its flavour and is no longer a game of ideology, but a game of self-aggrandisement.”

But she had paid a heavy price during her 48 years in politics.

In an interview with the New Nigerian newspaper in 2000, the then 67-year-old Sawaba recalled one of her worst moments, describing how she “was beaten up by six men and left to die in a bush” while on her way to a meeting. No one was ever charged over the assault.

On another occasion, the New Nigerian had quoted her as saying: “There is no opening in my body – mouth, nostrils, eyes or anywhere else – from which blood did not gush out from because of torture.

“My front teeth are artificial. The originals were broken and pulled out.”

She also confirmed that as a result of torture she had endured in prison in 1957, she had needed surgery to remove her womb to save her life.

Having witnessed the emotional and physical pain her mother endured, Bilikisu never contemplated following in her path. Now a 71-year-old grandmother and retired civil servant, she lives in the family home in Benin Street where photos of Karl Marx, Thomas Sankara and Samora Machel had once adorned the living room walls.

“My earliest memories of her when I was growing up was she was fully engaged and involved in civic politics alongside her friends,” Bilikisu recalls. “Our home was the centre of political meetings and activities.”

It was not only political associates who were welcomed in the house.

“Throughout her life, she maintained an open-door policy that saw friends, associates and ordinary members of the public come to the house,” Bilikisu explains.

“[Our] home was never free of adopted children, house guests and visitors.”

While Sawaba was a political activist to the outside world, at home she was someone who loved to cook, her daughter recalls.

“[She] would not allow anyone to cook for her. She had particular favourites, the Nupe traditional dish of Dukuno, and also Tuwon Shinkafa or Sakwara [popular northern Nigerian dishes].”

Sawaba married – and divorced – three more times after her teenage marriage. Her second husband was a railway worker, her third a Cameroonian boxer, who was regularly threatened with deportation by her political opponents, and her fourth a businessman.

After her last marriage ended, Sawaba devoted her energies to caring for the children she had taken in.

After her death at the age of 71 in October 2001, the Daily Trust newspaper wrote: “Gambo Sawaba took on herself the task of training other people’s children. She relished the job of taking care of helpless kids. Apart from dozens of her sister’s children that she brought up and trained, she adopted many from the street … right now there are over 30 of such adopted children in her house. Among them is a baby less than a month old she had just brought from the hospital a few days before her death.”

Bilikisu says that until her dying day, her mother “never stopped hoping for a better society and remained optimistic that Nigerians, especially women, would be free from tyranny and dictatorial leadership in governance”.

Her political status was perhaps illustrated by the presence of two former heads of state at her funeral rites in Zaria.

In its tribute, the New Nigerian described her as: “Blunt, non-conformist and outspoken, the most tortured and jailed Nigerian female politician.” 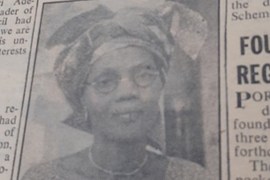 The anti-colonial and feminist activist fought British colonialists, traditional rulers and the government. 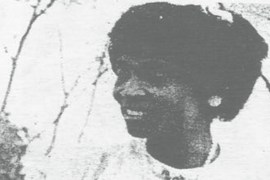 After the killing of 20 protesters during a mining strike in Nigeria, Ekpo made her name as a feminist and activist. 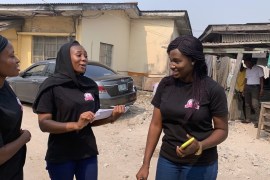 The all-women law firm helping prisoners get justice in Nigeria

Poor Nigerian inmates can wait years for their cases to go to trial, but now a group of lawyers are fighting the system. 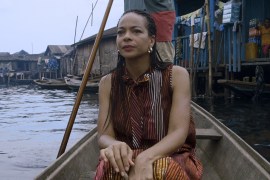 A Nigerian theatre director encourages women from Makoko in Lagos to participate in a play about violence against women.