Sitting in the warmth of the desert’s winter sun here in the Middle East, my mind turns to the contrast of the season at home, where the gales batter the west coast of the British Isles and the blizzards assault the moors. The cold waters of river and stream course through bleak and cold landscapes, as bare windswept trees frame leaden skies.

Yet on the riverbanks, there are also signs of the coming northern hemisphere spring, signs in which we can hold hope for the year ahead: the thrusting shoots of daffodils, the dainty heads of snowdrop flowers emerging against all the frozen, wintery odds.

Such moments in the cycle of nature always instil a sense of optimism and, of course, we need that more than ever this year. We fervently hope the 12 months ahead will see us emerge from this miserable pandemic. But it also needs to be the year in which nature itself is given a chance when natural systems that are breaking down are addressed and revived. Not least the rivers and streams themselves.

From pollution to climate change and over-extraction, the world’s waterways are under assault. And the plight of the Atlantic salmon tells the story.

Many years ago, I stood mesmerised by the flowing waters of the River Ettrick in the Scottish town of Selkirk. The place was alive with leaping fish, an astonishing sight as salmon migrating from seas off Greenland and Iceland leapt upstream over the town weir in their dozens. The wild fish were coming back to their home waters to spawn, as they have done for millennia.

But year after year, the numbers of returning salmon have been decreasing. And in the last few years, the decline has been in freefall. In Scotland, it is estimated that less than 5 percent of salmon return to their rivers, compared with 20 percent 50 years ago. And it is a problem across the range of the Atlantic salmon, from the United States to Russia.

“In 1985 there were between eight to 10 million salmon in Atlantic waters and rivers,” said Mark Bilsby of the Atlantic Salmon Trust. “Now we estimate numbers of two to three million. They are the proverbial canary in the coal mine, telling us something is drastically wrong in our rivers and seas.” 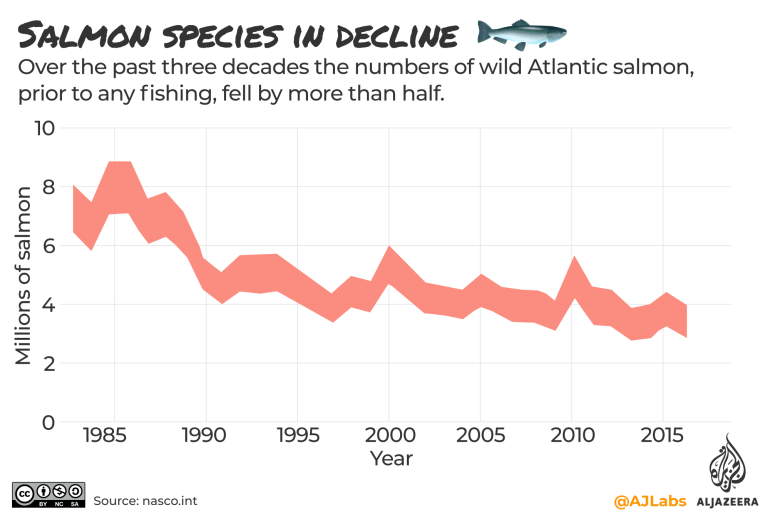 ”Most scientists point to problems at sea,” said Claire Mercer Nairne who runs a famous stretch of salmon fishing water on the River Tay in Perthshire in Scotland.

“The Atlantic salmon is born in a river and then migrates to the Norweigan Sea and the waters off southwest Greenland, to grow into a full-size adult,” Mercer Nairne told me. “These feeding grounds have been directly impacted by climate change and ocean warming.

“New competing carnivorous species like mackerel are moving north, not only putting pressure on food availability for salmon but also increasing the chances of wild salmon being caught as by-catches by trawlers.”

Problems at sea also bring the issue of aquaculture into focus which has had disastrous consequences for wild salmon populations.

Andrew Graham-Stewart is the director of Salmon and Trout Conservation, Scotland. He said that parasitic sea lice emanating from salmon farms have had a deadly impact on wild salmon numbers in the west highlands and islands of Scotland. The parasites latch on to and kill the fish before they even have a chance of reaching the open ocean. In Scotland, there are now more than 200 fish farms, which produce over 150,000 tonnes of salmon a year.

“We desperately need the Scottish government to make wild salmon an absolute political priority,” Graham-Stewart said. “Successive Scottish governments have failed in this regard, not least in their unwavering support – whatever the environmental consequences – for the expansion of the salmon farming industry.”

Graham-Stewart also stressed the need to address the factors limiting the number of juvenile salmon migrating from river to sea. “These include chemical and other pollution from agriculture and forestry, plus the impact of dams which deny or limit access for adult salmon to large areas of spawning habitat.” 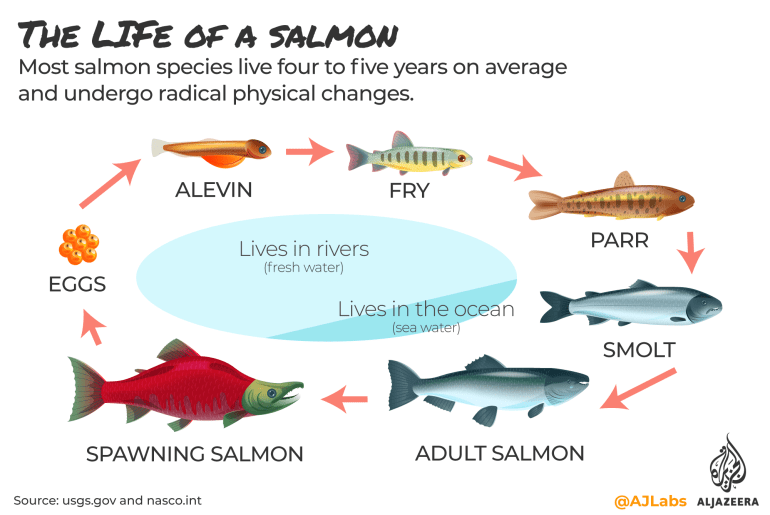 In the UK there is now a coordinated effort to save the Atlantic salmon. The Missing Salmon Alliance is bringing all the leading salmon conservation organisations together to fight to save the fish.

“The idea of the Alliance is to restore salmon numbers and stabilise and reverse the decline,” said Mark Bilsby of the Atlantic Salmon Trust. “We need to work together and pool resources to get the job done.”

Young salmon called smolts are being tagged in Scottish rivers and are then tracked to better understand where, when and how they go missing, to identify how to better look after them.

The life of the migrating salmon is one of the world’s natural wonders and for Mercer Nairne this badge of honour could be part of the solution.

“I would say that the best thing we can do to help the wild salmon is to make it popular, to make it loved by the wider public, just like seals and dolphins. There is nothing more majestic than the king of fish braving treacherous waterfalls to return home,” she said.

“I can see the wild Scottish salmon being part of the tourism trail just like the Scottish wild cat. It’s an iconic species that is part of British heritage.”

From tourism to the table, there is no question about the intrinsic worth of the Atlantic salmon. But a return to something akin to natural abundance in our rivers and streams would be a priceless comeback for this extraordinary and dangerously threatened fish.

1. The warmest decade: Some key climate groups, as well as NASA, put last year in a tie with 2016 as the warmest year on record. The “exceptionally hot” 2020 also helped cement the last decade as the warmest ever recorded.

2. Can the northern white rhino be saved?: With only two animals remaining, and the species declared extinct in the wild in 2008, scientists are looking for hope in stem cell research.

3. Reversing Trump’s Monumental changes: Two national monuments in Utah – Bears Ears and Grand-Staircase Escalante – were shrunk significantly under the Donald Trump presidency, paving the way for resource extraction. But the Joe Biden administration is expected to reverse this.

4. No vaccine for climate change: The world has fallen far behind in adapting to climate change, a new UN report said, while the COVID-19 pandemic has also pushed the climate crisis down the list of priorities for most countries.

by Charles, Prince of Wales, Speech to commemorate the 50th anniversary of the Atlantic Salmon Trust in 2017