It is a ship captain’s worst nightmare – the sickening crash and the ear-splitting, grinding crescendo as your vessel runs up on a reef. Such was the fate of the MV Wakashio, as it ran aground in Mauritius in the Indian Ocean on July 25.

No human lives were lost but the environmental consequences have been devastating, as heavy fuel oil seeped into the pristine, species-rich waters of a protected marine park, with unspoiled coral reefs and mangrove forests.

This accident illuminates all too clearly a debate that is going on thousands of kilometres away, as a warming ocean opens up new shipping routes in the Arctic.

It is not clear why the MV Wakashio crashed aground. Nagashiki Shipping, the vessel’s owners, have thrown up a protective firewall around the incident but sooner or later we will learn whether this was human error.

You can check the ship’s voyage history online, and it is evident she had been standing by, off the coast of Mauritius for some days, probably awaiting orders. The MV Wakashio is a bulk carrier – it is thought it was returning from China to Brazil after delivering a cargo of iron ore.

So it was the ship’s fuel, not its cargo, that caused the damage. Imagine the consequences had this incident involved a fully loaded oil tanker. 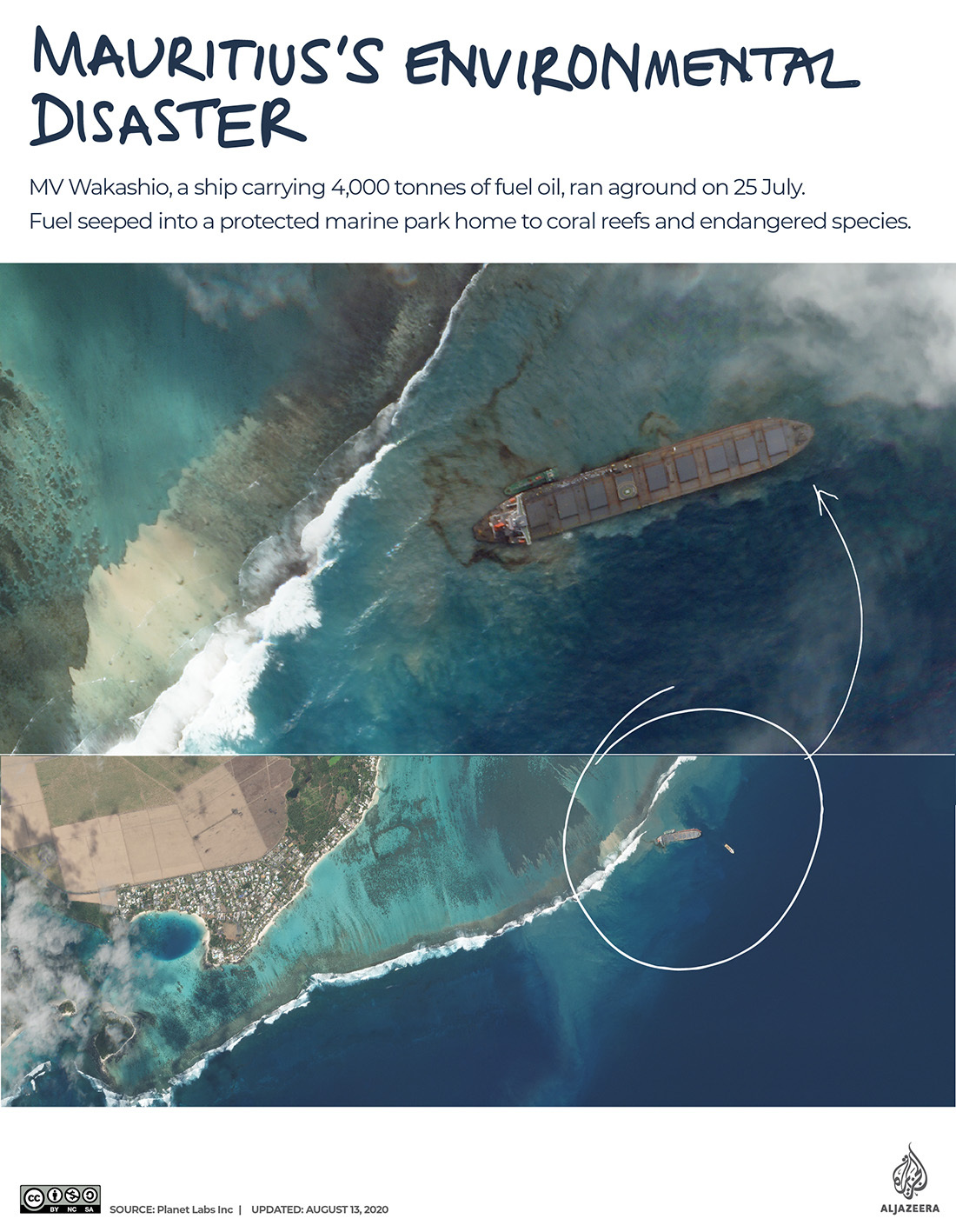 Most of the fuel oil has now been pumped off the ship, but not before 1,000 tonnes had spilled out.

This is a relatively small amount, roughly equivalent to 7,000 barrels of oil. By comparison, the Deepwater Horizon disaster threw out 3.19 million barrels.

“Thousands of species around the pristine lagoons are at risk of drowning in a sea of pollution, with dire consequences for Mauritius’s economy, food security and health,” said Happy Khambule, Greenpeace Africa’s senior climate and energy campaign manager. 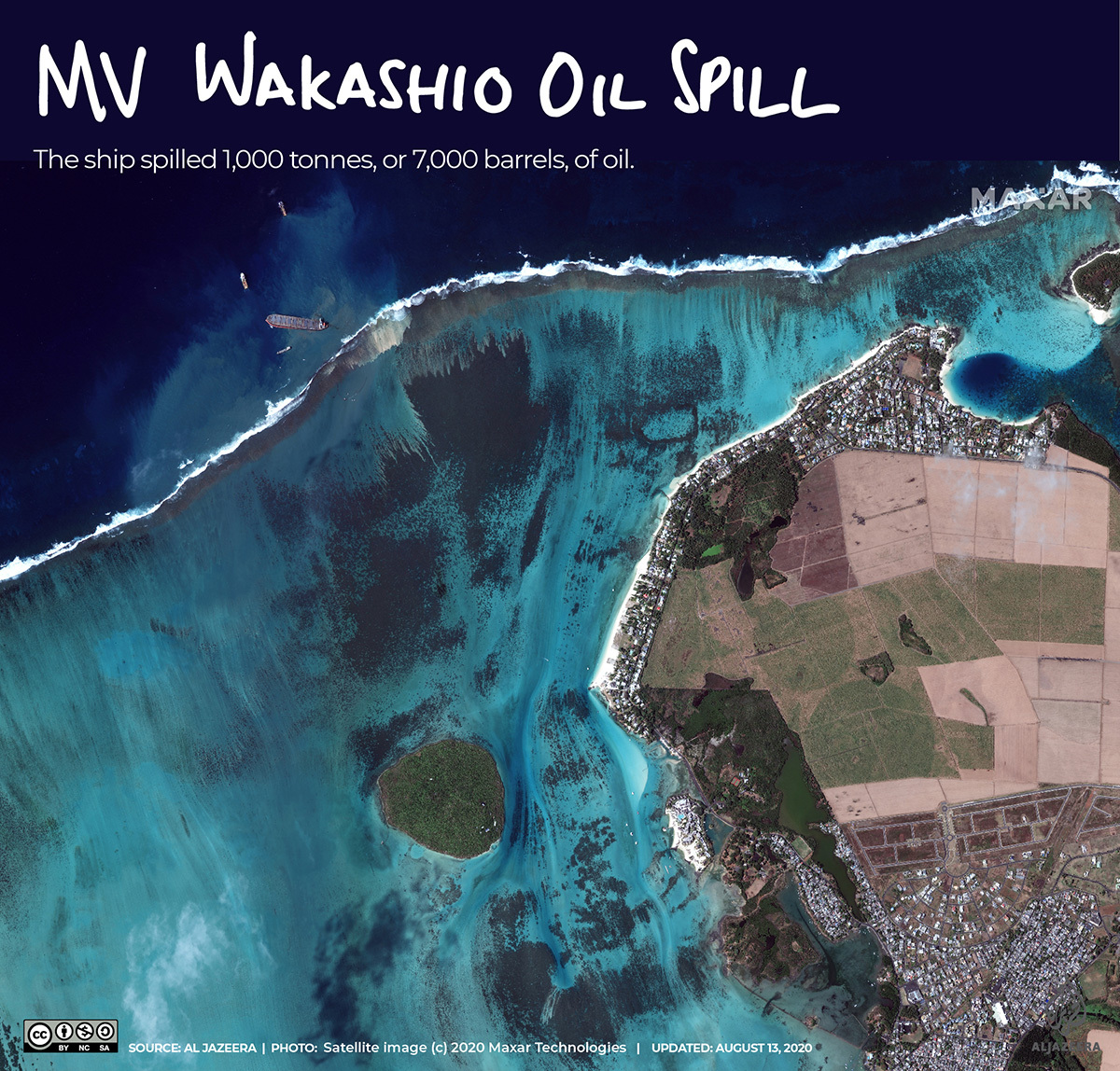 Mauritius is a key port of call for ships crossing the western Indian Ocean. According to Mongabay, this area is an “innocent passage”, a maritime designation that lets ships pass through a country’s territorial waters even if it is not docking there.

This is apparently the third ship to run aground in five years in Mauritian seas. And for years environmentalists have flagged the dangers posed by shipping near ecologically fragile areas.

Nowhere is the danger more apparent than in the Arctic. Oil spills in these remote, hostile waters are notoriously harder to deal with than in other seas. Logistics are challenging, to say the least, the window of opportunity to attempt the clean up is limited by the short summer season, oil gets trapped under the ice, and the list goes on.

And, of course, this is where all manner of biodiversity lives, from whales and polar bears to walruses and microscopic life at the ice edge. Imagine a polar bear trying to swim through a great slick of spilled oil. The possibility grows every day the sea ice retreats.

The Clean Arctic Alliance (CAA) has been campaigning for the ban of the use of heavy fuel oil in the Arctic, saying as sea ice continues to melt away Arctic waters are becoming increasingly navigable to vessels and the potential for accidents grows.

“The spill in Mauritius demonstrates the limitations of response operations to cope with heavy fuel oil spills even in relatively favourable conditions,” said Dave Walsh of the CAA.

“It underlines the need for the shipping industry to move away from powering vessels with fuels which pollute the air when they are burned and the ocean when there is an accident.”

Heavy fuel oil has already been banned in Antarctic waters, where commercial shipping routes are few and far between. Given recent experience in the Indian Ocean, it would seem that ban should extend at the very least to the northern polar extreme as well.

Or as Walsh said: “What has happened in Mauritius is not an isolated incident, but part of a pattern of unacceptable behaviour by an industry that routinely puts commercial considerations ahead of safety and the environment.

“Put simply, the shipping industry must find a way towards an exit from the age of dirty fossil fuel-powered shipping.” 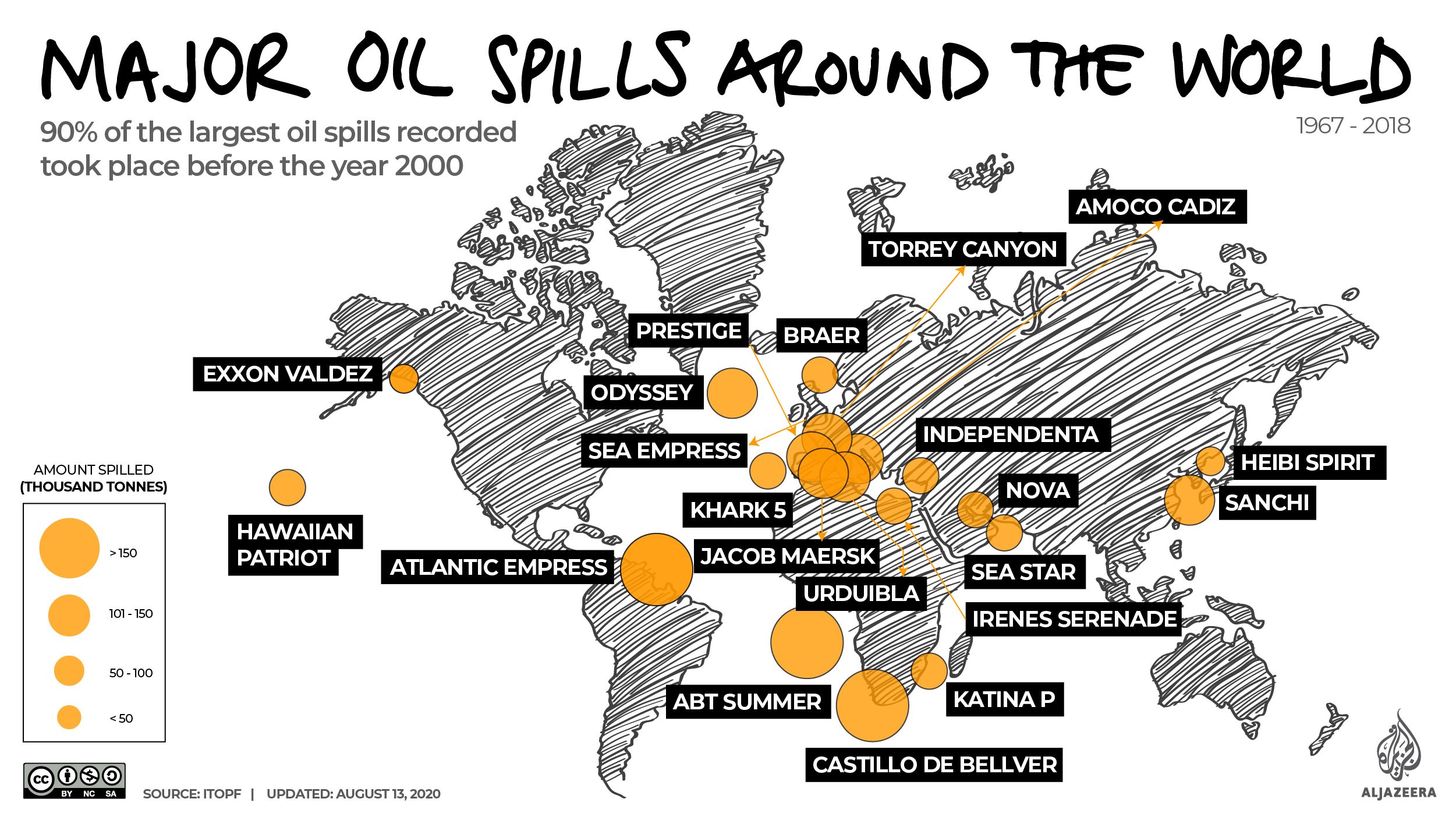 1. 4,000-year-old ice shelf crumbling in Canada: The Milne Ice Shelf is the last remaining ice shelf in Canada, and 43 percent had broken off at the end of July.

2. Jellyfish in the canals of Venice: Lockdown and the lack of tourists in Venice have given Jellyfish a chance to roam, and that may be due to their ability to adapt to change in ocean environments.

3. Elephants vs Farmers: To avoid human-elephant conflicts, farmers in Kenya and India have come up with humane ways of keeping elephants away, including beehive fences and warning systems.

4. The birds that don’t migrate: Big-brained birds are not the only ones who survive in extreme temperatures; researchers noticed that the ones with big guts do too by eating difficult-to-digest foods to survive winter.

5. Lockdown can’t fix global warming: Lockdowns will have little lasting impact on global warming but researchers state that countries adopting a green stimulus package can possibly cut the rising temperatures in half by 2050.

The colour of oil in much of the world runs red.