London, United Kingdom – Once a week, Hassan Akkad has a recurring nightmare.

He is in Syria. He is stuck. And he cannot leave.

“My happy memories of Syria are overridden by nightmares,” he tells Al Jazeera, in an interview on Skype. “It’s sad that this is how it seeps into my brain from my subconscious.”

Those happy memories are road trips to Latakia, barbecues in Ghouta, the countryside that surrounds Damascus, gathering with friends and “goofing around” and sitting around the family dinner table with his loved ones, his grandparents.

The Damascus native, now 32, was in his early 20s just before the war broke out.

When anti-government protests swelled on the streets, Akkad, then a high-school English teacher, took part and filmed the rallies.

He was detained twice, for two weeks each time.

“The first time in prison was the worst, that’s when I was tortured. I still have a scar on my wrist, it was smashed so I have a titanium pin in it.”

On the second occasion, he was put in solitary confinement. When he got out, he was banned from working and lost his teaching job.

Although he had never wanted to leave, he did not feel safe.

He fled, at first staying in the Middle East. In September 2015, after a punishing 87-day journey across Europe, he arrived in London.

He filmed the dangerous voyage, including the moment everyone on board his packed dinghy, along with children, nearly drowned. His footage was included in a documentary series – Exodus: Our Journey to Europe – which went on to win a British Academy of Film and Television Arts (BAFTA) Award.

In England, he received legal asylum and kindness. Families in Brixton and Hitchin gave him a room in their homes.

For the past five years, he has worked in film and TV production and for Choose Love, a refugee advocacy organisation.

I think, to me, that is the worst part of this pandemic - that people are dying alone.

But almost two months ago, his career path took a sharp turn.

He now works as a cleaner at Whipps Cross in Leytonstone, east London, one of the capital’s busiest hospitals, in a COVID-19 ward.

“But I have been treated very well by the public so far. When I showed up here, I was in a bad physical and mental state – they helped me on my feet. Leytonstone is my adopted home. Nationality doesn’t dictate our kindness. It’s what I want to do, I want to help my neighbours, the patients and the staff.”

He signed up after googling “urgent coronavirus front-line jobs”.

“It led me to a link. Five hospitals were urgently looking for cleaners and one of them was Whipps Cross,” which is about a mile from his home.

He had read a study about how the virus was found on a cruise ship 17 days after infected passengers had left.

“I connected the dots, I figured out they urgently need cleaners because of this – it survives on surfaces, and NHS staff and patients were contracting it. I didn’t even think twice. I ran it by my fiancee, didn’t tell my parents, and went to the induction. I only wanted to know if I would be provided with PPE. They said yes. The rest is history.”

Before taking up the cleaning job, filled with a desire to help amid the pandemic, he had delivered groceries to people self-isolating and had volunteered to work on British farms amid fears of food shortages, “but I never heard back”.

At the entrance of the ward he works in, there are three signs.

One warns staff not to enter unless they are wearing PPE, another says visitors are not allowed in and a third is a reminder – that you are about to enter a COVID-19 ward.

There are 18 beds. At the height of the epidemic, the ward was full – not a single empty bed for weeks amid a rush of coronavirus patients needing oxygen masks to survive.

“Today we had 10 patients, instead of 18,” says Akkad. “[But] I think it’s too early to ease the lockdown. Everyone is worried about a second wave.”

The UK – Europe’s worst and the world’s second most affected country in terms of deaths – is in the midst of easing its coronavirus lockdown.

COVID-19 has killed about 35,000 people in the country and infected more than 240,000, although these figures are widely understood to be lower than the actual toll.

For eight hours a day, wearing gloves, two masks and plastic aprons, Akkad disinfects toilets and mops floors with a powerful, chlorine-heavy detergent. He takes the rubbish out and places it in a special dumpster for virus-contaminated waste. He meticulously wipes down “all the hotspots” – light switches, door handles, windows, doors, sinks.

“Anything you can touch with your hand has to be cleaned,” he says.

“We use disposable mops – every hospital now has changed all the procedures in terms of cleaning. You can’t use the same mop twice – you use it for a bit and then it goes in the bin.

“When a patient gets discharged or sadly passes away, we do a ‘terminal cleaning’,” a thorough process to control the spread of infections.

“We go to that bed, take out the mattress, and wipe and disinfect every inch of the bed frame. And then we clean that area, so when we have a new patient, they don’t come to a contaminated bed.”

I cringe when I see government ministers clapping.

“In my first week, I was quite shocked. It’s different from when you see it on the telly, to actually being there. And the reason why it’s called the front line … that’s where you are face to face with the pandemic.

Several patients and at least one doctor at Whipps Cross University Hospital, Dr Habibhai Babu, known to colleagues as Babu, have died of coronavirus.

As in much of the rest of the world, strict measures to contain the spread of infection mean coronavirus patients die alone.

“The pandemic has changed our rituals. Everything has changed. For me personally, I have always been distant from my family. Social distancing isn’t a new thing to Syrians, due to the war and hard visa systems. My parents attended my engagement party on Skype. I attended my brother’s wedding in Iraq on Skype. This is very familiar to me.”

Holding back tears, he said: “I’ve witnessed two patients saying goodbye to their loved ones on Skype. It is one of the toughest things I’ve ever experienced in my life.

“The patients are not aware that they are dying, their loved ones are. They [the relatives] were informed by staff, so that’s why they have arranged for this call.

“We are around those patients, we don’t leave their sides. But for them to pass away without their relatives, their daughters and husbands and children around them, it’s incredibly hard, a very hard thing to witness.

“I think to me, that is the worst part of this pandemic – that people are dying alone.”

As well as tens of thousands of patients, dozens of NHS workers have died from COVID-19, many of whom are from ethnic minority backgrounds.

In Akkad’s ward, he is one of the three male staff – two cleaners and a doctor. The rest are women, including grandmothers.

They come from more than 10 different countries.

“We are united by a mission or goal to combat this unprecedented healthcare crisis and help these patients,” Akkad says.

But as the national conversation focuses on the deaths of doctors and nurses, Akkad notes that hospital cleaners and others at the “bottom of the pyramid” often encounter even greater risk.

“The people who slide under the radar are cleaners, porters, ward hosts and healthcare assistants. Ninety-nine percent are from an immigrant background and on minimum wage. They risk their lives. You cannot work from home if you are a cleaner or a porter.”

While he appreciates the public’s embrace of front-line NHS workers, which has seen Britons clap on their doorsteps each week to show their appreciation, he baulks at the UK government’s handling of the crisis.

“They have failed on every level,” he says. “The UK has the second-highest number of deaths [after the US]. They were very slow on implementing the lockdown, prioritising the economy over people’s lives.

“I cringe when I see government ministers clapping.”

Looking ahead, he says he will continue in the role for as long as he is needed, “as long as I physically and emotionally can”.

But he has already started to feel an effect on his body.

“I have injuries in my wrists from prison in Syria. Physically I have started to hurt. There is a shooting pain in my wrists because of too much mopping.

“I am going to try to recover. Emotionally, thank God, I have a therapist. Without one, I wouldn’t be able to do this.”

In the months before the pandemic took hold, much of the West was witnessing rising populism. There were reports of growing xenophobia and anti-migrant attacks in post-Brexit England, images on the news of crowded US-run immigration detention centres, and people fleeing war and persecution faced an increasingly hostile reception on Europe’s borders.

While the pandemic is often naively misinterpreted as a great leveller – “self-isolating in Yorkshire isn’t like self-isolating in Idlib or Moria, or Yemen or Gaza”, says Akkad, there is some reason for hope.

“I don’t think we can go back to that,” he says, of the atmosphere before the global health crisis.

“There will be positive things coming out this pandemic and one of them could be that the world will be more open to migrants and refugees, and realise the value that they have in their host communities.

“I hope that the world will be kinder.” 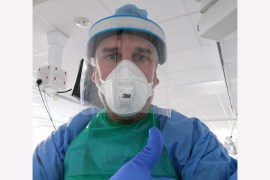 Thousands of EU migrants work as doctors, nurses, carers, cleaners and porters as the UK fights gravest threat in years. 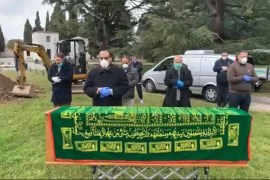