Every year in the early hours of a December night, in some outer suburb of a far-flung city in the echoing corridors of a vast conference hall, you will find a ragged horde of weary journalists and TV news crews slumped over tables, crashed out on floors, and staring aimlessly at the doors of locked-up coffee shops.

That is how the final hours of the annual United Nations climate summit always end up – be it in Lima, Doha, Warsaw or Marrakesh.

Suddenly, there is a flurry of activity as rumours circulate that a deal has been reached by the even more tired, but still talking, teams of national negotiators.

It will almost certainly be a false alarm and everyone goes back to their pillow of a rolled-up coat awaiting the mercy of conclusion. And so the talks will go on, until we are told to shuffle back tomorrow.

The next day, it starts all over again, lasting long into the night. Gallows humour rules and speculation is rife about whether it is Brazil, or Saudi Arabia, or perhaps Australia holding things up this time around.

At long last the deal is done, and everyone breaks out in spontaneous applause – more from relief than anything else. There is accord, at least of sorts. The TV lights snap on, live hits are done, stories are filed, and off we stagger to try and find a cab in a desolate industrial zone somewhere in the world.

The negotiations were as tough and interminable as ever. But when the hammer came down on THE AGREEMENT on December 12, the place erupted into a heartfelt, impassioned, joyous, standing ovation from all who were there.

From Laurent Fabius, the exhausted French foreign minister who presided over the gruelling talks, to Christiana Figueres who steered the UN climate ship through the storms of debate, to the delegates, the journalists, even the cleaners I recall were jigging around their mops.

It was an extraordinary moment. After more than two decades of talks, rich and poor countries united in this attempt to keep global warming to below 2C above pre-industrial levels, ideally 1.5C.

So five years on, how are we doing?

We all know the story: extreme weather events, displacing millions, costing billions, are increasing year on year, from wildfires, to superstorms, from floods to droughts. Emissions have continued to rise and temperatures follow suit, with the last decade the hottest on record.

National ambitions to reduce emissions have been insufficient and the experts talk of global temperatures soaring past the Paris targets to plus 3C. And who knows how extreme things will be at that level, given what the world is getting now (at just 1.1C above pre-industrial temperatures).

Out of the tragedy of the COVID-19 pandemic, major economies are eyeing a green, sustainable, renewable recovery with trillions of dollars of stimulus funds available.

Donald Trump pulled the United States out of the Paris Agreement but President-elect Joe Biden has pledged to immediately return when he takes office in January. The world’s second-biggest emitter of greenhouse gases is back at the negotiating table and there is no substitute for the momentum that will bring.

Assuming Biden adopts a similar goal when he takes office, warming could be held to 2.1C by 2100 according to the research network Climate Action Tracker. Suddenly the targets of the Paris agreement are in sight.

This week, I interviewed Patricia Espinosa, the executive secretary of the United Nations Framework Convention of Climate Change, for Talk to Al Jazeera. She told me we are at a turning point in history.

“In my view, it’s a great opportunity. Very few leaders and very few generations have the opportunity to become so relevant for history overall,” Espinosa said. “It doesn’t mean it is going to be easy. On the contrary, this puts on our shoulders an even bigger responsibility.”

Now all eyes are on the next UN Climate Conference at the end of 2021 in Glasgow. Nations pledging action is one thing, implementing policies is quite another. But never will there be a better opportunity to realise the goals of the Paris agreement and put the brakes on the planet’s biggest crisis of all. Rolled-up coats at the ready, Glasgow here we come.

2. California trees in a fight for their lives: Ancient redwoods, sequoias and Joshua trees in the western US are among the world’s oldest living things. But wildfires spurred on by the climate crisis are killing them.

3. Healthy food for a growing planet: The human diet places strain on the environment and our planet’s resources. With the Earth’s population expected to reach 10 billion by 2050, our eating habits need to change to sustain us.

4. Sir David Attenborough and a YouTuber team up: Watch young environmentalist Jack Harries interview the legendary British naturalist about the climate crisis and his new film, A Life On Our Planet.

You have already determined our present, which is obviously catastrophic. Now fix the future. 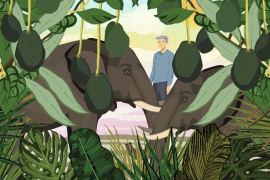 Demand for the fruit and a new farm threaten to cut animals off from their habitat in Kenya’s Amboseli National Park. 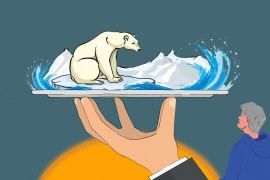 Climate under Trump: A blip or four lost years?

In one of his last major climate moves, Trump has opened the Arctic National Wildlife Refuge to oil and gas drilling. 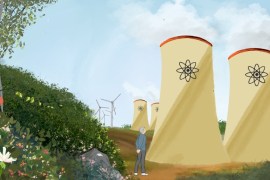 Is nuclear power a problem or a solution?

Amid the global climate crisis, environmentalists are divided over the costs and benefits of nuclear energy.