Washington, DC – The first Palestinian museum in Washington, DC, is set to open on Saturday, exhibiting artwork and historical and cultural documentation of Palestine through contributions from Palestinians around the world.

The Museum of the Palestinian People (MPP), with the motto “Many Stories, One Heart ” features two sections. The temporary exhibit currently holds work from five artists with the theme “Reimagining a Future”. The permanent exhibition, curated by Nada Odeh, depicts the history and culture of the Palestinian people through four segments: “A Remarkable People”, “Nakba and the Diaspora”, “Occupation” and “A Resilient People”.

Saturday’s opening comes a little more than a year after the first Palestinian museum in the United States opened its doors in Woodbridge, Connecticut.

The seeds of MPP, which formerly operated as a travelling exhibit, were planted as early as 2015.

“When I came to DC in 2011, I was really amazed by the museums and monuments and memorials in the city,” said Bshara Nassar, founder and director of the museum.

“And at the same time, I was lost because I couldn’t find a place where the Palestinian story has been told,” Nassar told Al Jazeera.

Nassar, along with a small group of supporters, started doing travelling exhibitions in 2015, beginning in Washington, DC. They would go on to partner with Palestinian artists from Palestine as well as in the diaspora, and travelled with their work to universities, community centres, churches, and also engaged in cultural nights, and hosted speaking events with artists.

Now, the permanent museum exhibits document the history of Palestine.

“We want this exhibit focusing on the stories of the people and to tell how Palestine was before and how it’s now,” said Odeh, the curator. “Not from the political side but from the people’s side: what the people are doing what they’re accomplishing in their lives – in the US, or Palestine, or Israeli territory, all the combinations. That’s very important to reflect.”

Nizar Farsakh, Chair of the Board of MPP, sees the value in this.

From Bethlehem to DC

The temporary exhibit focuses on the optimism for the future, and features work from artists Ahmed Hmeedat, Manal Deeb, Mohammad Musallam, Dalia Elcharbini and Haya Zaatry.

Hmeedat, who was part of the initial travelling exhibit, was also an artist in residence with the museum late last year.

He grew up in the Dheisheh refugee camp in the occupied West Bank and started painting when he was a child.

He said he used to paint murals when he was in high school, and that artwork had a political spin.

For his current exhibition at MPP, he wanted to stray away from the narrative of victimhood of Palestinians.

“Why we are commemorating the past – the past is good but at the end of the day, the past doesn’t exist. The past is over,” he said in a phone interview with Al Jazeera. He said when he discussed the museum’s project with Nassar, they decided to “focus on the positive things, positive energy, positive stories that encourage people to move forward”.

Hmeedat’s artwork is a testament to that sentiment. The 27-year-old has four pieces exhibited at the museum with one showing war criminals being prosecuted, another showing sunlight entering through a now-broken Israeli separation wall, another one showing an old man smoking hookah against a disappearing checkpoint wall, and another depicting Palestinian farmers harvesting oranges, which Hmeedat said was a key production before 1948.

He added that his message through his artwork at the museum is “what you imagine would become a reality”.

Across from his work at the gallery stands the gold leaf-plated paintings by Elcharbini, who is based in Ontario.

Elcharbini, whose signature is to use gold leaf and silver leaf in her artwork, aimed to envision the future with stones and sand from Palestine.

Her three paintings are varnished with sand, crushed stone from the soil of Jerusalem and small pieces of olive tree bark from the Al Baddawi tree. 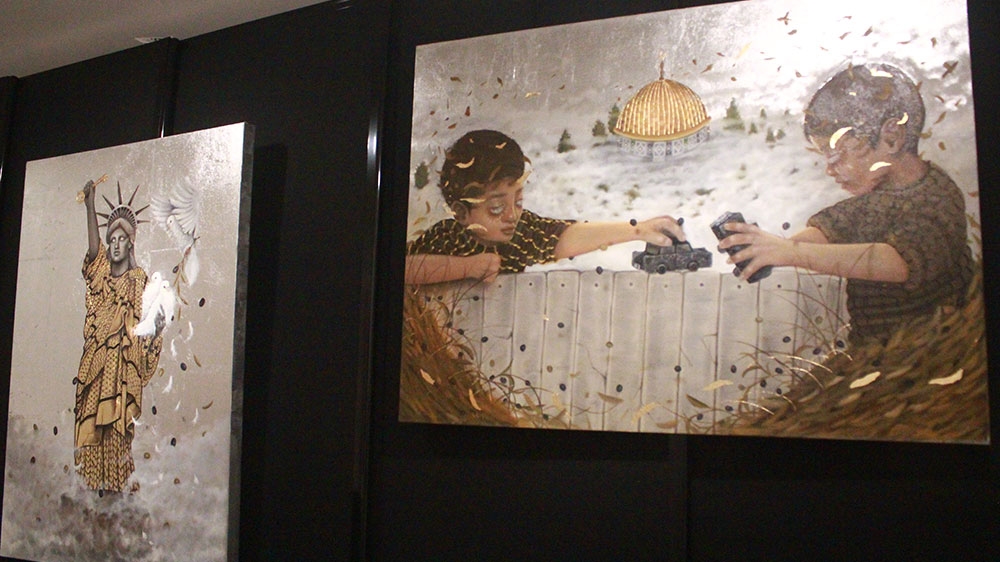 Elcharbini, 29, was born and raised in Kuwait and moved to Canada with her family in 2005. She said receiving these crushed particles from the soil was the closest she ever came to experiencing Palestine.

“It was in a ziplocked bag with the sand and the stone, [and] when I received that, I was tearing up because that was literally the closest I’ve ever felt to my homeland,” she told Al Jazeera via phone.

The museum is donation-based and has raised funding from many in the Palestinian diaspora, and Jewish Americans, among others.

“I think [the museum] is long overdue,” said Roberta Schwartz, who assisted with grant writing for the museum.

“I think the stories haven’t been told by Palestinians. They’ve been told by other people that in many cases have really just produced a completely inaccurate and demeaning and racist story,” she told Al Jazeera.

Speaking of the current theme of the museum’s exhibition, Nassar said “what we’re doing through this exhibit is [relaying] an act of courage and resistance we are showing visitors — Palestinians and non-Palestinians – a different future, and inviting others, with the question – how can you be part of the experience?”

From June 20, the museum will be open from 12pm to 6pm, Thursday to Saturday.