Ali Zai, Pakistan – Clad in a colourful floral shalwar kameez, her head draped in a brown shawl against the winter chill, Kainat Mohmand goes door to door to make sure no child in this northern Pakistani village is left behind.

“If we are nice and well-mannered, then the people are convinced and they accept us,” says the 19-year-old polio vaccinator in the village of Ali Zai, about 10km south of Peshawar, the capital of Khyber Pakhtunkhwa province.

“But this area is very dangerous,” she adds, quickly.

In April, that danger crystallised. After a false rumour spread during a polio vaccination campaign that the drops were making children sick, hundreds of parents rushed their children to hospital, while thousands across the province refused to take part in the campaign at all.

In Ali Zai, dozens formed an angry mob that attacked a local government hospital, tearing down walls and, later, burning it to the ground. The violence led to the vaccination campaign being suspended across the province, an epicentre of polio infection in Pakistan.

The incident here was illustrative of Pakistan’s struggle to contain the spread of polio in 2019, with cases rising to a five-year high amid suspicions of the vaccine and, officials say, a new trend: that of parents deprioritising polio vaccination due to the myriad other dangers to their lives that are of more immediate concern.

Since 1988, worldwide cases of poliomyelitis have dropped by 99 percent, from more than 350,000 to just 33 cases in 2018, according to the World Health Organization (WHO). The near-eradication of the disease has been the result of a sustained campaign of oral and injected vaccines targeting children under five, who are at risk of contracting the debilitating, highly infectious disease that can lead to paralysis and death.

Today, polio remains endemic in just three countries: Pakistan, Afghanistan and Nigeria (which has not reported a case in three years). This year, however, has seen the disease bounce back, with at least 125 cases reported, according to the Global Polio Eradication Initiative (GPEI). The vast majority – 111 cases – have been reported from Pakistan, mostly in its northwestern Khyber Pakhtunkhwa province, according to government data.

So what has gone wrong for Pakistan’s polio programme, which brought cases down from 306 in 2014 to just 12 last year?

Rana Muhammad Safdar, the coordinator of the country’s National Emergency Operations Centre on polio eradication, says the main obstacle was a complete breakdown in national coordination after a general election in mid-2018 that saw a new government, led by the Pakistan Tehreek-e-Insaf’s (PTI) Imran Khan, brought into power for the first time.

“[Last year] was a year of political transition in Pakistan, and the way that political transition happens here, we have three governments in a short span of time: the outgoing, the interim and the incoming,” he said. “Whenever a government comes, they conduct transfers on a large scale […] These people, they kept on changing like anything.”

For a programme that relies on more than 265,000 polio vaccinators going door to door to reach more than 35 million children, guarded by a further 100,000 security personnel, that kind of widescale bureaucratic change across almost every district in the country can be fatal.

“That affected the dynamics of our teams and the kind of oversight which was there, that dipped,” said Safdar.

Further, as the number of cases began to rise, opposition political parties began to use the polio infections as a political issue to criticise the government, he says. The resulting political pressure pushed vaccinators to skew their results.

“When there is unnecessary pressure on them, and they feel that these are the kinds of results that [authorities] want to see, then they start providing those kinds of results, instead of focusing on real vaccinations,” he said.

Hamid Jafari, the director of the WHO’s polio eradication programme in the eastern Mediterranean region, agrees that there were technical shortcomings in the programme’s ability to reach every child.

“The programme had under-estimated the number of children [that] missed vaccination repeatedly in core polio infected areas,” he explained. “At its core, polio eradication is straightforward. If you vaccinate enough children in a given area, poliovirus has nowhere to hide and dies out. When not all children are reached poliovirus continues to find susceptible children.”

Also, mass misinformation campaigns were launched regarding the use of the vaccine, urging parents to refuse to give the drops to their children for fear of health concerns.

“They would take anti-vaxxer videos from Europe, then dub them in Urdu, professionally, and then they’d be promoted [online],” said Safdar. “And they would be timed so that they would circulate about a week before our immunisation campaigns.”

There has, however, been a new trend emerging among all of this: that of communities linking their use of the polio vaccine to other basic demands from the state, leveraging the international community’s focus on eradication of the disease to achieve local governance outcomes. (Last year, international donors spent more than $800m on global polio eradication efforts, according to GPEI.)

“They see the importance [that the government] attaches to the polio vaccines, that is why they are making counter demands,” said one polio programme official, speaking on condition of anonymity because he was not authorised to speak to the media. “They know that if they do not accept the polio drops, there will be pressure on government officials, and if the pressure comes then they will have to provide those other services.”

“People say that you are providing us [polio vaccine] services, fine, but we also need these services along with them. Electricity, water and natural gas, jobs.”

This year has seen numerous boycotts, with thousands of families in the Kurram, Orakzai, Bannu, North Waziristan and Peshawar districts refusing to give their children polio drops unless their local needs are met.

Protest organisers told Al Jazeera that while they had no doubt the polio vaccines were necessary for their children, they were using the polio campaign as a bargaining chip to address longstanding grievances.

“[We boycotted] because there was a lot of focus from the government on polio,” said Khalil Wazir, a protest organiser in North Waziristan district. His village refused to give their children polio drops for eight months until their demands – for government compensation owed to them to rebuild their homes – were met.

Within weeks of the boycott, government officials who Wazir had been unsuccessfully lobbying for years agreed to fulfil their obligations, he said.

“One day a woman died in our village from cold. Another was killed by a mad dog bite. Another died from a snake bite. We felt that our children were dying of heat, cold and other things, it was not polio,” he said.

In Ali Zai, that sentiment echoes in the words of Mazhar Khan, a 32-year-old religious school administrator who had refused to give his three children the drops due to concerns about health implications.

“We see all these diseases, diabetes, blood pressure, jaundice,” he said, sitting with a team of polio vaccinators on a rope-bed in the winter sun. “These are the diseases we see most often here. As far as polio is concerned, I don’t think there would have been a single case of polio in our whole neighbourhood. But to treat it, police are being brought here [to force us to take the drops].”

“These questions regarding the polio vaccine are coming about because we have bigger problems than polio in our society, why is the government not solving those?”

It is a tricky problem to resolve, government officials admit.

“We work with the parents … we tell them that we understand that their requests are genuine, but if you go towards a boycott because of this, then you are depriving your children further,” said Safdar, the polio programme chief.

The polio programme in Pakistan has long been the subject of misinformation and rumours, with many linking it to an unspecified “Western” conspiracy to sterilise or otherwise harm Muslims. Many cite the US Central Intelligence Agency’s (CIA) use of a fake vaccination campaign through a Pakistani doctor, Shakil Afridi, to verify the identity of Osama bin Laden before the raid to kill him in 2011 as proof of these theories.

The conspiracy theories do not just result in increased refusals, they also come at a far greater cost. Since 2012, at least 98 people have been killed in attacks on Pakistan’s polio vaccination campaigns, according to an Al Jazeera tally.

The latest attack took place on December 18, with two policemen killed while on their way to join a vaccination team in the northern district of Lower Dir.

Out in the streets of Ali Zai, Kainat Mohmand is still trying to convince parents who had earlier refused the vaccine for their children to change their minds. There are no policemen here, despite the attacks in April.

“Usually, they look at us with suspicion,” she says. “They ask me to clarify things for them, about the vaccine. Many of them get convinced, then.”

She smiles, broadly, and adds: “We try to make the impossible, possible.” 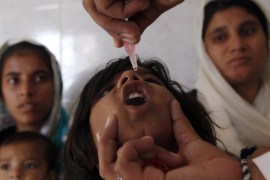 Vaccine hesitancy is not a ‘Muslim problem’

But it does seem to be a European one.