On Sunday, thousands of Rohingya refugees marked the second anniversary of their exodus into Bangladesh by rallying and praying as they demand Myanmar grant them citizenship and other rights before they agree to return.

The Rohingya, a majority-Muslim minority, are not recognised as an ethnic group in Myanmar, despite having lived there for generations. They have been denied citizenship and are rendered stateless.

A UN-established investigation last year recommended the prosecution of Myanmar’s top military commanders on charges of genocide, war crimes and crimes against humanity for the crackdown on the Rohingya.

The United Nations has called the Rohingya crisis a “textbook example of ethnic cleansing”.

Refugees at the camp in Cox’s Bazar shared stories of the dangerous and arduous journey they had to make in order to reach Bangladesh. The journey came after their villages were set on fire, the men killed and the women raped.

Al Jazeera’s journalists reflect on the stories they had heard from the refugees while covering the Rohingya crisis in Cox’s Bazar, including one of a woman whose baby was thrown into a fire in front of her eyes.

Mohammad Jamjoom, correspondent: “I have covered war. I have covered violence throughout my career. But I have never heard of anything like that happening to human beings.”

Showkat Shafi, photographer: “Thousands and thousands of people struggling to get food or shelter. They were without shoes, without clothes.”

Sorin Furcoi, photographer: “The conditions in the camps were terrible. The water wasn’t necessarily very clean. I tasted it and I still remember the stale, muddy, rusty taste.” 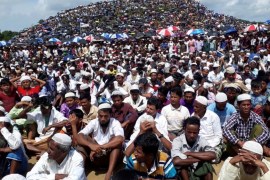 Refugees in Bangladesh camps demand rights and citizenship on second anniversary of exodus after Myanmar crackdown. 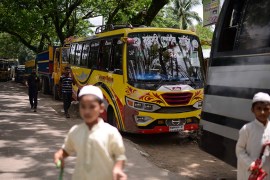 Empty buses in Bangladesh as no Rohingya turn up for repatriation

Fresh push to repatriate Rohingya refugees to Myanmar fails amid demands of safety and full citizenship.