Puerto Princesa, the Philippines – Angela was just 14 the first time she got pregnant.

Her boyfriend was 19, and it was her first sexual experience.

“I wanted to cry; I was pushing him away. But he said he would take responsibility and that he loved me,” she says.

Her first pregnancy ended in miscarriage, but Angela is now a mother of four. Her youngest child is just a week old.

The age of consent in this deeply conservative Catholic country is just 12, one of the lowest in the world, but access to contraception is limited, and abortion is illegal.

Angela’s home province of Palawan has one of the country’s highest rates of teen pregnancies. One in five teenage girls in Palawan is pregnant or already has a child.

damaged the uterus. So I got scared … That’s why I kept getting pregnant.”]

Like Angela, most come from very poor communities and receive little or no sex education.

She says her boyfriend’s parents told her contraception had bad side effects.

“They said it damaged the uterus. So I got scared … That’s why I kept getting pregnant.”

The first time she got pregnant, she miscarried at seven months. By the time she was 16, she had given birth to another baby.

Just a few weeks after the birth, she was pregnant again.

Amina Evangelista-Swanepoel, one of the founders of Roots of Health, a Palawan women’s health NGO, says the high rate of teen pregnancy has wide-ranging consequences.

“It is really a tremendous problem – not just in terms of health of the teenagers who are becoming parents at such young ages and then the children they themselves have, but also costing the government a lot,” she says.

“So much money lost in productivity… and in terms of them being unable to join the formal economy because they haven’t finished high school, it’s really a very big problem for the country.”

Although girls can legally have sex from the age of 12, they need their parents’ permission to get contraception or an HIV test if they are under 18.

Health workers say this leads to many girls having unprotected sex and leaves them vulnerable to pregnancy.

‘Our lawmakers are deeply religious people’

After much lobbying by women’s rights advocates and debate that lasted more than a decade, the Philippines national congress finally passed a comprehensive reproductive health law in 2012, guaranteeing access to free contraception and sex education in school.

But five years later, that law is yet to be implemented due to fierce opposition from the Catholic Church and other anti-abortion rights groups, who challenged it before the Supreme Court.

There is supposed to be a separation between the state and the church in the Philippines, but most of our lawmakers are deeply religious people. While I can respect their personal views, I do think it's problematic when they're imposing their own religious beliefs on a population of over 100 million.

More than 80 percent of Filipinos are Catholic, and the Church is one of the country’s most powerful institutions, wielding enormous influence over government policy, particularly family planning issues.

“There is supposed to be a separation between the state and the church in the Philippines, but most of our lawmakers are deeply religious people,” says Evangelista-Swanepoel.

“While I can respect their personal views, I do think it’s problematic when they’re imposing their own religious beliefs on a population of over 100 million.”

“They don’t allot very much funding or any at all to contraception, and so this really ties the hands of the provincial health office … they can’t really do very much without having the budget to have activities and programmes,” she says.

‘All human life is good’

Palawan’s vice governor Dennis Socrates is a firm believer in abstinence until marriage.

“I think the solution lies in a more intensive education campaign to tell young people that sex is good, but it has to be within the context of a loving and insoluble marriage and it must be open to life, to parenting, which is the natural consequence of the marital act,” he tells Al Jazeera.

We declared Puerto Princesa city a pro-life, pro-family city, which is really a harmless thing and I simply refused to allocate funds, specifically to buy contraceptives.

Socrates, a member of the conservative Catholic group Opus Dei, is vehemently opposed to all forms of artificial contraception and even some natural ones.

“Even withdrawal is an immoral means for preventing birth because there’s an active, a positive act to prevent the outcome which is the natural consequence of the marital act,” Socrates says. “All human life is good, even life that is helpless, even life that belongs to a poor family, even human life that isn’t wanted by the mother.”

When Socrates was mayor of Puerto Princesa in the early 2000s, he stopped the funding for contraceptives distributed through public health centres.

“We declared Puerto Princesa city a pro-life, pro-family city which is really a harmless thing and I simply refused to allocate funds, specifically to buy contraceptives,” he says.

But Angela, the young mother of four, believes having access to contraception and sex education could have changed the course of her life.

Now living with her boyfriend and children in a ramshackle hut surrounded by mud, Angela often struggles to scrounge together enough food to feed her family.

“Sometimes I cry because my children are suffering as sometimes they have nothing to eat,” she says. “Sometimes I wish this didn’t happen to me so my children wouldn’t have to suffer.”

Angela believes things would have been very different if she’d known more as a teenager.

“It’s better to be educated about what contraceptives are available and what sex is about. That’s better than being ignorant.”

She is determined that the baby she gave birth to a week ago will be her last – she was fitted with an intrauterine device after the birth.

“This will be the last one. I don’t want more kids,” Angela says. “I might die if I give birth again.” 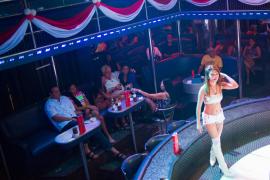 As sex tourists depart Balibago, they leave behind a growing number of children conceived in illicit exchanges. 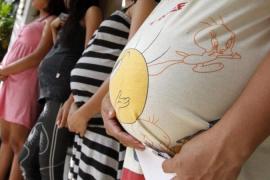 Country tops list of Asian countries, with one in 10 women in 15-19 age group already a mother, according to UN study.