When I told people I was going to the remote Faroe Islands to film women from Asia who’d moved there to marry men they met online, many would assume they faced some kind of exploitation or trafficking.

What other reason could possibly explain trading a life in the tropics for a treeless, windswept country at the door of the Arctic circle that is cloaked in darkness for six months of the year?

I am not Asian, but having lived in several Asian countries over many years, I know women who fight the assumption that they are victims no matter where in the world they move. Especially if they marry a white man.

It was the same for many of the 300 Thai and Filipina women who have become the largest ethnic minority on the Faroe Islands, an archipelago that is home to only 50,000 people and 80,000 sheep.

Truth be told, the Faroes need these women more than the women need the Faroes. For decades, local women have been leaving the islands in search of better jobs and more exotic husbands.

Now, with 1,500 more men than women between the ages of 18 and 60 on the islands, finding a wife can be tough. So many local men have been turning to Asia.

The myth of the subservient Asian bride

At first, the Thai and Filipina women were reluctant to talk to me out of fear of how they would be portrayed. Visiting journalists who’d come and gone had left a less than favourable impression, broadcasting stories that did little to break down the myth of the subservient Asian bride.

So I dug a little deeper.

All of the women I spoke to had jobs. Granted, most of those jobs were lower qualified positions than what they had studied at home, but they paid much better wages and that made them happy. All of them mentioned safety as the number one attraction of life in the Faroe Islands. And all of them described themselves as strong, independent women because they had chosen to live here.

As one explained, women who marry a European and stay in the Philippines or Thailand often have household help and a high standard of living. Not so on the Faroes. Women have to go it alone to earn money, raise children, learn one of the world’s most difficult languages and survive the long dark winters.

They described the thrill of getting their driver’s license, succeeding at job interviews, having their own bank accounts.

What’s more, they described their husbands as less patriarchal than men in their home countries. This was the most surprising revelation to me. My encounters with Faroese men left me with the impression that they were highly traditional. “I’m sick of all this feminism stuff,” one told me. “It makes sense to get a wife from Asia, they know their role.”

So how could the women see themselves as living these emancipated lives while the men see them as fulfilling their ideal of a traditional wife?

I’ve come to the conclusion that both are probably right. Somehow, these women have found space for themselves to live the life they want, even within the confines of a conservative society.

All too often in the media, we portray Asian women as victims. We see pictures from refugee camps, stories about exploitation of every kind.

Of course, a light needs to be shone on these grave abuses. But for every one of those stories, there are also stories of proud, resourceful Asian women, choosing lives in faraway places and doing so on their own terms. 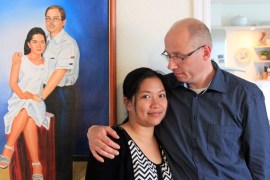 Looking for love in the Faroes

Meet the South East Asian women saving the population of the remote Faroe Islands, one marriage at a time.