Caracas, Venezuela – Luis Alberto Machado can barely sustain a conversation, let alone remember the day he attacked his mother by hitting her over the head with a rock.

The 34-year-old was diagnosed with schizophrenia in his mid-teens. Back then he was still a boy but today his gangly frame towers over his petite 60-year-old mother, Maria Machado, making her an easy target for his violent psychosis.

“We’ve had to lose the fear and learn to hold him down,” explained Luis’s 28-year-old sister Maria Ruli. “[He’s broken] the fridge, the blender. My mother has no life because of him.”

“It’s gotten worse because there’s a lack of Sinogan,” said Maria Machado in reference to a sedative widely used for psychiatric illnesses.

The three family members were sitting in the afternoon heat, the last in a line of patients waiting outside the emergency department of one of Caracas’ psychiatric hospitals. Ahead of them a handful of parents and carers also waited, hoping to receive anti-psychotic medication for their patients.

In 2013 Venezuelans had access to 70 types of anti-psychotics; today there are only five, according to Wadalberto Rodriguez, president of the Venezuelan Society of Psychiatry.

“There’s a 95 percent shortage of anti-psychotics,” said Dr Rodriguez. “It’s an extremely complex situation because one anti-depressant cannot cure a variety of depressions.”

As is the case with staple foods, many Venezuelans are often forced to turn to the black market to buy medication at exorbitant prices.

“All patients are receiving the same kind of treatment, which means that many of them aren’t getting any better and the symptoms then become chronic,” explained Rodriguez.

The steep reduction in anti-psychotics in Venezuela is partly a result of the country’s financial strife.

According to Rodriguez, President Nicolas Maduro’s socialist government has often been unable to pay the foreign companies providing Venezuela with medication.

“As a result [the companies] have stopped dispatching [the drugs],” he said.

The failed Vatican-brokered talks between the government and the opposition saw the latter demand the opening of a humanitarian channel to allow medicine into the country, but that channel never materialised.

As a result, many mental health patients in Venezuela are regressing to a state of psychosis and anguish that cannot easily be treated. And although helplines and counselling groups have become increasingly common, this has not halted the rising suicide rate.

While there are no accurate figures yet, psychologist Dr Yorelis Acosta is adamant that there has been a stark rise in suicides.

“We’re starting to see more information on suicides and keeping count of it,” said Acosta. “In the month of January, 32 suicides were registered in Caracas alone. This is an alarming number that should grab the government’s attention.”

The shortage of drugs, which began in mid-2016, has resulted in a large number of patients being re-admitted into under-equipped hospitals.

“We’ve more and more patients each day,” said 32-year-old nurse Carlos, whose real name has been changed to protect his identity.

Before 2016 the clinic received an average of five emergency cases per day. On the day Al Jazeera visited, they received about 20 during a single afternoon, in addition to those already hospitalised.

“Almost all the patients we have at the moment have been re-admitted because they couldn’t find their [prescribed] medicine,” explained the nurse, sitting outside the psychiatric hospital he has worked at for eight years. “The last medications we received came through a month ago and before that we hadn’t received any in four months.”

Despite a surge in people needing to be hospitalised, doctors have been forced to turn away desperate cases owing to lack of food, water, medical equipment and even staff.

Carlos is one of four nurses per 30 patients in a hospital with poor ventilation, and where there is running water for just half an hour each morning and 10 minutes each afternoon.

“The rooms are fetid and sometimes the patients can’t shower. People wet themselves and we’ve no diapers,” said Carlos.

“There are 60 [hospitalised] patients at the moment, but we’ve capacity for 90,. We have had to block places because there are no doctors. They’ve left,” added the young nurse.

Working to take care of the mentally ill has become an ordeal in Venezuela’s understaffed hospitals.

With sedatives no longer readily available, physical restraint has become a common practice, which also has its hazards for the staff.

“We’ve no measures to protect ourselves; a patient with psychosis [can] self-harm, harm other patients and throw the ward into chaos,” explained Carlos.

Outside the emergency ward was a young carer with scars inflicted by her unmedicated patient on her forearms. The patient, an elderly woman with spots of dry blood on her earlobes and a mass of dishevelled hair, sat beside her, mumbling unintelligible phrases.

Next to the carer and her patient, an elderly mother clutched a brown folder containing years of medical bills belonging to her schizophrenic son, a pale 62-year-old man with large brown eyes. His mother had spent the past day and a half searching for his medication in several pharmacies to no avail.

Her son was diagnosed with schizophrenia at 28, but he went on to study law and was employed for many years. “He worked in a court with top lawyers, but because of the shortage of medication he became ill again,” said Clara, whose real name has been changed to protect her privacy.

Clara explained that she has spent more than $5,000 in healthcare for her son in a year and lost 20kg in the same space of time as a result of the country’s dire food shortage.

“Three months ago the situation got worse, he stopped eating and he doesn’t go to the toilet any more. He’s going to die of malnourishment,” she added.

“Either [the government should] give me the medicine or pay me back what they owe me.”

That warm February afternoon the mother-of-three had tried to hospitalise her son, but a shortage of staff and medication meant that they were turned away and forced to try other hospitals.

While patients and their dwindling access to drugs is a prime concern in a country where mental health problems are on the rise, family members have also become victims of scarcity, forced to supervise patients in an almost oppressive manner in the hope that they will not slip into psychosis and harm themselves or others. On the way into the emergency ward a leaflet on the door offers counselling sessions to family members.

Nicole plans to attend these meetings to help her cope with her 24-year-old schizophrenic son’s bouts of psychosis. “Sometimes I feel like my head is under too much pressure and that my veins might explode,” she explained.

Sometimes Nicole – who asked that her real name not be used – spends entire mornings searching for her son’s antipsychotic medication instead of working her morning shift.

“I do what I can, I even owe [people] money in order to buy the medicine. Right now I’m searching for one medication, but you never know if you’re going to find it, so when he gets down to three or four pills you start to feel anguish and anxiety,” explained the 60-year-old mother whose son regularly slips into psychosis, a state that sees him tormented by visual and auditory hallucinations.

“Sometimes I spend one or two days [searching for the medication]. I worry because if I don’t work I don’t earn,” said Nicole, who cares for her son alone.

Those who can afford to leave Venezuela have done so in large numbers, travelling to neighbouring countries or to the US. Patricia, a 35-year-old stylist, has plans to migrate soon to find financial stability and a functioning health system for her depression and anxiety attacks.

“The state of the country is affecting me, so I’ve decided to go to Colombia,” explained Patricia, who had been unable to find two of her three prescribed drugs.

One mother, who was also desperately searching for medication for her son, interjected: “They didn’t send us an atomic bomb, but they left us without medication – which is the same.” 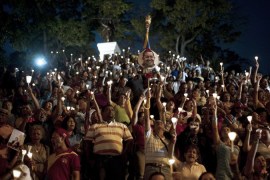 Hundreds of well wishers light candles and pray for recently returned president who is suffering from an unnamed cancer. 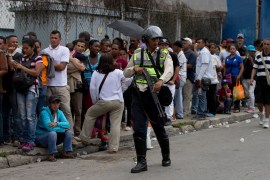 The faces of the Venezuelan crisis

From desperate mothers trying to save their children to farmers living in fear, we examine the human toll of the crisis.