CIA Director Mike Pompeo is expected to visit Turkey in the first overseas trip after his appointment to the role by US President Donald Trump.

Pompeo’s unexpected official visit to Turkey, perceived as a sign of the new US administration’s support for Ankara, came on the back of a 45-minute telephone conversation between Trump and his Turkish counterpart, Recep Tayyip Erdogan, on Tuesday.

Trump discussed the “close, long-standing relationship” between the US and Turkey, and welcomed Turkey’s contributions to the fight against Islamic State of Iraq and the Levant (ISIL, also known as ISIS) group, the White House said in a statement about the phone call, which was the first between the two leaders since Trump’s inauguration three weeks ago.

READ MORE: From Obama to Trump – Lessons and challenges

Turkish analysts told Al Jazeera that while the “positive” phone conversation between the two leaders and the CIA chief’s unexpected visit to Ankara may indicate the start of a new security-based partnership between Turkey and the US, there is still a cloud of uncertainty over the future of Turkish-American relations.

“It is safe to assume, after witnessing the first three weeks of his time in office, that President Trump’s approach to foreign relations is going to be unpredictable and erratic,” Ali Faik Demir, expert on Turkish foreign policy at Istanbul’s Galatasaray University, told Al Jazeera.

It is safe to assume, after witnessing the first three weeks of his time in office, that President Trump's approach to foreign relations is going to be unpredictable and erratic.

“He already jeopardised his country’s relatively peaceful relations with major players like Iran and China and created problems with several loyal US allies, like Australia and the EU.

“So the positive noises that are being made today [about Turkey’s relationship with the US], may not mean anything tomorrow.”

Predictions on the future of the US-Turkey partnership can only be made when “there is a winner in the battle between the US establishment and Trump”, Metin Gurcan, a security analyst and former adviser to the Turkish military, said.

“We are either going to witness the Trumpification of the US state or institutionalisation of Trump,” Gurcan told Al Jazeera.

“And if Trump comes out as the victor in that battle, we are going to have to reassess Turkish-American relations on a daily basis, depending on the president’s mood.”

But analysts agreed that, even if Trump’s tenure as president is expected to be full of surprises for Turkey, it is going to be shaped by the new president’s perceptions about security.

“There is one thing we know about Trump: His priority, at home and abroad, is security,” Demir said. ” And we already know that Trump’s first phone call with Erdogan focused on security issues.”

Trump’s attitude towards Turkey is going to be shaped by the perceived security threat he will choose to prioritise, Gurcan explained.

“Trump may focus on containing Russia or Iran’s growing influence in the Middle East, or make the fight against radical armed networks like ISIL his priority,” he said.

“Because Trump is not making his priorities clear, Ankara is not yet sure whether to feel content or concerned about the future of its relations with the US.”

According to analysts, discussions on Syria and the Syrian Kurdish forces are going to be the focus of Pompeo’s visit to Ankara.

“Turkish officials will undoubtedly try to convince Pompeo to support a Turkish-operated safe zone in northern Syria, “Gurcan said.  “They are also going to lobby for the eradication of Kurdish forces from that area.”

The Syrian Kurdish forces, under the banner of the People’s Protection Units (YPG), controls swaths of territory along Syria’s northeastern border with Turkey, while its political wing, the Kurdish Democratic Union Party (PYD), claims control over an autonomous region now called Rojava.

“The Trump administration wants to end the security threats and immigration waves coming from the Middle East without sending American soldiers to the region,” Demir said.

“I don’t think it really matters to Trump whether the Kurds or the Turks do the job for him. So, I believe, if Turkish government agrees to play a more active military role in the region, the new US administration would happily turn its back to the Kurdish forces.”

Turkey’s recent rapprochement with Russia is not likely to cause friction between Ankara and Washington, analysts explained.

“Trump has been sending positive signals to Moscow since the beginning of his election campaign,” Demir said. “Russia is already the primary actor in Syria, and Trump does not seem to be too concerned about this. At this point Erdogan’s close relations with Vladimir Putin would not be seen as detrimental to US interests.”

A further rapprochement between Russia and the US, on the other hand, may be problematic for Turkey’s aspirations in the Middle East, said Gurcan.

“Now, Russia feels like entire northern Syria should be under its influence. Trump may not bother to maintain the status quo Obama created and allow Putin to control both sides of the river. This may be a hindrance for Turkey’s plans for its southern border.”

READ MORE: ‘Which parts of Syria should be bombed?’

Fethullah Gulen, a US-based preacher whom the Turkish government holds responsible for last year’s bloody coup attempt, is likely to be a bargaining chip in Pompeo’s negotiations with Turkish officials, analysts said.

“Turkey wants Gulen to be extradited as soon as possible and the US is aware of Ankara’s restlessness about this issue,” Gurcan said. “The Trump administration may offer to speed up the extradition process in exchange for Turkey’s increased military involvement in the fight against ISIL.”

But Demir pointed out that, especially in the current political climate, Trump may not have the power to extradite Gulen, even if he wanted to.

“It is entirely possible for the Trump administration to try using Gulen as a bargaining chip in its relations and security partnerships with Turkey,” Demir said.

“But we have to remember that the US is still a state of law and the judiciary may stop any extradition attempt coming from the White House. ” 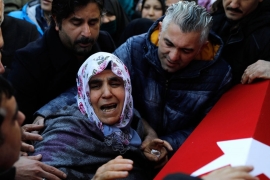 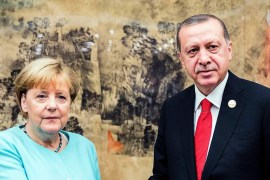