Donald Trump revealed some insight into his psyche and perhaps a focus of his administration on New Year’s Eve.

“If you have something really important,” he told reporters, “write it out and have it delivered by courier, the old fashioned way because, I’ll tell you what, no computer is safe”.

Trump made his observation to help explain why he remains sceptical that Russia was behind the hacking of embarrassing Democratic campaign e-mails, which his fellow Republicans have nevertheless accepted as fact and condemned as an assault on the US electoral process.

No doubt Hillary Clinton’s fortunes would have turned out differently if she had conducted state department business by communicating via courier and attached instructions with her correspondence to “burn after reading”.

Trump’s reliance on computers for his business, of course, is essential even if he personally does not use a computer other than to send out proclamations via Twitter at all hours.

But the president-elect has yet to explain how he would “make America great again” in the face of technological disruption.

After Trump claimed credit for blocking the transfer of some 500 American jobs to Mexico by arranging taxpayer-funded incentives to Carrier Corporation, the company followed up by warning its employees that it still planned to outsource more jobs this year.

The CEO of its parent company (and prominent Pentagon contractor) warned that the money with which Carrier was bought off would help pay for improvements that will doom other jobs.

“We’re going to…automate, to drive the cost down, so that we can continue to be competitive,” he said.

“Is it as cheap as moving to Mexico with lower cost labour? No. But we will make that plant competitive just because we’ll make the capital investments there. But what that ultimately means is there will be fewer jobs.”

America has lost some six million manufacturing jobs in the past 15 years.

But according to a study by Ball State University’s Center for Business and Economic Research, 85 percent of them were victim to technological change – largely automation – and not to international trade.

The operating cost of a computer-programmed robot is around $8 an hour, about one-third the hourly wages with benefits paid to a human American welder for the same work.

No matter which candidate had won this election, the challenge to the government would have been the same: coping with the pace of technological change without the further hollowing-out of a middle class once raised on manufacturing employment.

Trump never addressed himself to that reality during his campaign, nor have any of his designated Commerce, Treasury, Energy or Education secretaries given any indication of how they might tackle it.

But somehow they are not likely to be using couriers. 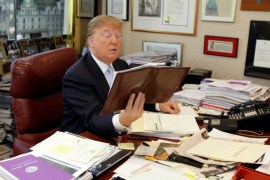