Standing Rock Indian Reservation, United States – Early last month, more than 2,000 veterans gathered at the Standing Rock Indian Reservation in North Dakota in a show of solidarity with protesters camped there, who opposed the proposed Dakota Access pipeline. The veterans were drawn by pictures and video of fire hoses, police dogs, and rubber bullets being used against protesters.

For many people following the story, these images evoked ones from the civil rights movement in the 1960s; but for some activists and Native residents of the Dakotas, this comparison is all too real.

“We are the Mississippi of the North,” Native American activist Winona LaDuke told reporters at the camp. “Welcome to the Deep North. It’s not just about the pipeline. Civil society could use a little help out here.”

IN PICTURES: Standing Rock ‘water protectors’ dig in for the winter

After the Army Corps of Engineers refused to grant a permit for the disputed section of the pipeline, most of the protesters went home, along with the media that followed them. But part of the protest camp remains, together with what many Natives describe as the “Deep North” conditions of life in the Dakotas: deeply ingrained prejudice and a history of unequal treatment.

“I’ve been to the South,” said Brandon Mauai, a Native American deacon with the Episcopal church at Standing Rock, “and I could feel how my black friends were still discriminated against there. In the North, it’s flip-flopped: Blacks are more accepted here, and Natives are discriminated against.”

The Dakotas, of course, never had any legal separation between races as the pre-civil rights South did. But many Natives nevertheless describe persistent discrimination.

“Driving while Indian”, for example, refers to what many people perceive as the police practice of treating Native drivers differently from whites.

“It’s been my experience that [The Morton County Sheriff’s Department] [racially] profiles,” said John Floberg, a priest who has lived at Standing Rock for 25 years.

“They set up patrols on the highway at key times when they know Native traffic is moving on the reservation, profiling for drunk driving, driving without a licence or without insurance.”

Many Natives cannot remember meeting a Native American highway patrol. With so much need for Native American police officers on the reservation, most Natives interested in law enforcement prefer to work there than for the Morton County Sheriff’s Department or the Highway Patrol.

“I don’t think anyone would work for them,” said Lynn Colombe, a member of the Lakota tribe who lives on the Rosebud reservation on the South Dakota side of the border. “Why would you be the only Native there?”

The Morton County Sheriff’s Department stated that Morton County does not collect data on the ethnicity of its employees and therefore could not confirm if there were any Native Americans employed as police officers.

There are few statistics on race and traffic stops in the Dakotas, but one study in Arizona showed that Native Americans were more likely to be stopped by the highway patrol than whites, and 3.5 times more likely to be searched if they were stopped.

Differences between white and Native interactions with the police go beyond the highways.

Two cases brought by the American Civil Liberties Union in the past decade have pointed to different treatment of Native children in the Dakotas.

In one, Native children in Winner, South Dakota, were found to be suspended and expelled from school in far greater numbers than their non-Native peers. While about one third of the elementary grade students were Native American, only one or two Natives remained in the senior class, the majority of the rest having been expelled.

The school district maintained that Native children were suspended and expelled only as a result of discipline problems, but agreed to make more than 20 changes in how they dealt with this population. In the past five years, more Native students have graduated than in the past 30 years combined, according to the ACLU.

In another case, also in South Dakota, the Rapid City Department of Social Services was found to have removed Native children from their parents at a rate 11 times higher than that of non-Natives.

In addition, the process by which parents could contest the actions of the Department of Social Services was, “a sham”, according to Stephen Pevar, an ACLU lawyer who worked on the case. Native parents were not given a copy of the petition against them, allowed to testify, appointed an attorney, or allowed to cross examine DSS workers.

A district court decision found that the state had violated seven federal rights of Native children, parents and tribes and required the DSS to make a number of changes in how it dealt with Native families.

Mistrust and condescension, rooted in history

Beyond institutional disparities, many Natives describe being treated with mistrust and condescension when they leave the reservation and come to town.

Lynn Colombe grew up on the Rosebud Reservation but spent much of her life in Tucson, Arizona.

“My two little girls never knew what colour they were in Tucson,” she said, “but living here, they do.”

The ways that anti-Native sentiment expresses itself can be subtle. “You might be [at a shop],” said Colombe, “and the person ahead of you is non-Indian, and the store employee will be chatting them up, and the minute you get there, they don’t even say hello. It’s a manner: always talking down to you, like you’re stupid, as if you don’t even know how to make change.”

“When we go [to some retail shops],” Brandon Mauai said, “we’re always pulled aside to have our items checked with the receipt, while non-Natives just walk by.”

Another Lakota from Standing Rock recalled that at the Fourth of July parade in Mandan, near Bismarck, people on the floats handed out candy to the crowd – but seemed to skip his own family. “My kids said, ‘Dad, why aren’t we getting any candy?'” he said.

This long-standing tension has roots in a violent history.

Standing Rock reservation was established at the end of the 19th-century wars between the Sioux tribes and the US Army.

Its current boundaries date from 1889, when Congress reduced and divided the Great Sioux Reservation. At that time, the reservation covered most of South Dakota, but was split into six separate reservations in an effort to make way for white homesteaders and “conform the Indian to white man’s ways” by forcing the traditionally nomadic people to become farmers.

The ensuing crisis culminated in the the US Army’s killing of the Sioux spiritual leader Sitting Bull and, two weeks later, 300 more Sioux, in the infamous massacre at Wounded Knee. It was not an unpopular action.

The US Army had fought the plains tribes for decades. When General Custer was killed at the Battle of Little Bighorn in 1876, the US was celebrating its centennial; timing of the news helped make Custer a martyr and the Sioux a particularly hated villain.

In response to news of the Wounded Knee massacre, the Saturday Pioneer, a newspaper from Aberdeen, South Dakota, published an editorial declaring: “The Pioneer has before declared that our only safety depends upon the total extirmination [sic] of the Indians. Having wronged them for centuries we had better, in order to protect our civilisation, follow it up by one more wrong and wipe these untamed and untamable creatures from the face of the earth.”

The author was Pioneer editor L Frank Baum (who would go on to write the beloved Oz books), and he was expressing a mainstream opinion.

There’s no reason to think these extreme attitudes are still common – in fact, during the protests, people who made overtly racist statements on social media sometimes lost their jobs as a result. But race relations have never been smooth, and the Standing Rock protests renewed long-simmering tensions.

After the Army Corps’ decision, the Facebook page of conservative radio station KYFR exploded with angry comments. “Congrats now get out of our state you filthy animals. The standing rock tribe might as well leave too no true North Dakotans will ever be attending their casino or resort again …”

The camp at Standing Rock remains, with protesters living in temporary camps on the edge of the reservation, saying they are prepared to stay until the the pipeline company leaves.

The history of this place helps to show why, for many of the Lakota protesters, the camp is not just a response to a pipeline proposal but to the experience of feeling like a second-class citizen.

“It’s way long past overdue,” said Joe Mancillas, 76, at a meeting at the camp. “It’s about dignity.” 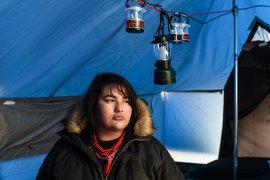 Standing Rock ‘water protectors’ dig in for the winter 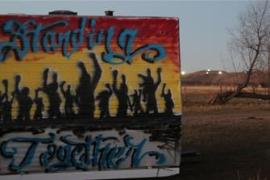 Standing Rock and the Battle Beyond

An insight into the battle for Native American land rights as protests continue against the Dakota Access oil pipeline.