Italian police have recovered two paintings by the Dutch artist Vincent Van Gogh in Naples that were stolen nearly 14 years ago in the Netherlands.

The Van Gogh Museum in Amsterdam said on Friday that the art works, which were stolen in 2002, had been removed from their frames but appeared largely undamaged.

The museum said the paintings were recovered during a “massive, continuing investigation” commissioned by the Italian Public Prosecutions Department, against organised crime.

“It is unknown where the works were kept after the theft in 2002, but it can be assumed that the paintings were not preserved under suitable conditions,” Axel Ruger, director of the Van Gogh Museum, told reporters in Naples.

It is not yet known when the paintings, which have an estimated value in the tens of millions of euros, will be returned to the Dutch capital.

Two men were given prison sentences for the 2002 robbery, although they had pleaded not guilty. There had been no trace of the paintings until now and the Van Gogh Museum had offered a finder’s reward of 100,000 euros ($112,000).

The works, Congregation Leaving the Reformed Church in Nuenen and View of the Sea at Scheveningen, are both from relatively early in Van Gogh’s career.

Congregation Leaving the Reformed Church in Nuenen was painted in early 1884 for van Gogh’s mother and father.

View of the Sea at Scheveningen, which was painted in 1882, is a painting of a fishing village near The Hague set against a dark sky. 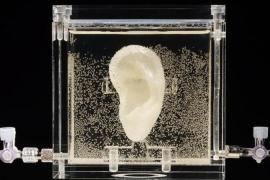 Descendant supplies genetic material to create “living replica” of ear that Dutch artist cut off during a psychotic fit. 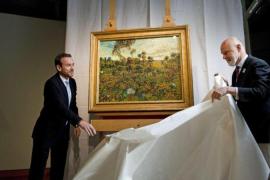 “Fake” banished to an attic for over a century becomes first painting by the Dutch master to be discovered since 1928.