Seoul, South Korea – In April 2014, Kim Sang-ho received a phone call at his home in Seoul from a fellow diver, pleading with him to get down to the country’s southern coast as soon as possible.

It was several days after the Sewol ferry had sunk, and Kim had been glued to his television, watching the constant coverage as a team of rescuers tried to retrieve the bodies of more than 300 people still inside the ferry.

Kim accepted his colleague’s request after he learned that there weren’t enough certified divers on the scene, and drove several hours to the site. He would spend two months risking his own life, making several deep-sea dives every day searching for bodies.

More than two years later, South Korean society still hasn’t reckoned with the legacy of one of its worst peacetime disasters and Kim is still suffering the physical and emotional trauma of the experience.

“My biggest regret is that I got there late, that I couldn’t save even one person,” Kim said during an interview at a small restaurant in Gangnam, the affluent Seoul district where he lives.

With an athletic build, taut skin and a slightly receding hairline, Kim looks younger than his 43 years, and dresses in a form fitting white t-shirt and grey slacks. Though there were no survivors by the time he arrived, he kept diving.

“I felt like I could die myself, but after a while, that stopped mattering to me.”

The stuff of nightmares

The Sewol went down in a stretch of water with strong currents and poor visibility, which complicated divers’ efforts to reach the hull.

Kim says that even when he managed to reach the ferry, things only got harder. He had to squeeze through an opening slightly smaller than his muscular shoulders, then slither down narrow hallways to the passenger rooms where most of the bodies were.

Kim and the other divers worked around the clock in three-hour shifts, followed by three hours of rest. Kim said the stress of dangerous deep dives, and the grim task of searching for waterlogged corpses, made it difficult to get restful sleep.

Even now he doesn’t sleep soundly, bothered by regular nightmares that evoke the texture of flesh decomposing in salt water, and the sensation of clinging to dead bodies as he carried them to the surface.

The anxiety was increased for the divers who had to use a thin, flexible air hose, which could potentially fold over with every turn and cut off the diver’s air supply. Such a hose was necessary, Kim said, as a more rigid hose would have made it impossible for divers to make the intricate manoeuvres needed inside the ferry.

The situation was frightening even for Kim, who has a wealth of experience with challenging dives, going back to his time serving in the South Korean navy in his early 20s. He quickly found that he had a knack for diving; his speed and zeal in the water earned him the nickname “Jaws” from his comrades.

READ MORE: Sewol disaster victims – the bedrooms they left behind

Throughout his career, he has been assigned to the epicentres of some of South Korea’s darkest episodes.

In 1993, he retrieved victims from the country’s gravest maritime disaster before the Sewol, the sinking of the Seohae ferry, in which  292 people died. The next year he was dispatched to the waters beneath the Seongsu Bridge in Seoul, which collapsed during a morning rush hour, causing  32 deaths.

Those episodes, and the Sewol sinking, have special resonance among South Koreans, as they highlight the corners that were cut regarding safety in the country’s rush to develop economically after being decimated in the 1950-53 Korean War. While many South Koreans take pride in rising from postwar poverty to developed country status, such mishaps serve as a painful reminder of how far there still is to go.

Victims’ families and their supporters are pushing for a thorough investigation into the causes of the Sewol sinking, arguing that aspects of how and why the vessel went down, and why such a large portion of the 476 passengers died, haven’t been clarified.

Experts say it is normal for victims to seek a clear understanding of the details of a traumatic episode before moving on.

“We had a collective death of our kids, our friends, our brothers and sisters. It is no wonder that we question how this happened,” said Ansuk Jeong, a PhD in community psychology and lecturer in the University of Utah’s psychology department.

Kim hasn’t worked as a diver since the Sewol mission. In addition to the psychological hardship, he suffered a shoulder injury that has required surgery and still hasn’t fully healed. Kim says he sustained the injury when on one dive some objects tumbled out of a Sewol luggage compartment and on to his shoulder.

He spends much of his time these days meeting friends for drinks, cruising between Gangnam bars and restaurants in his sleek black sedan. He says he drinks every day to take his mind off his troubles.

“I use this as a kind of medicine,” he said, pointing to a cup of makgeolli, a Korean rice-based alcohol.

Though out of practice, he still clings to his identity as a diver. The background photo on his mobile phone is a fully uniformed diver. On his upper left arm he has a large tattoo of a diver, with the gothic text, “The greatest deep sea diver”. He regularly texts with fellow divers, and around once a month large groups of divers get together for food and drinks, in what have become informal therapy sessions.

“We get together to talk about what we’ve been through,” Kim said. “We’re the only ones who understand each other’s experiences.”

The divers’ informal group drew closer in June, when 43-year-old diver Kim Gwan-hong was found dead from apparent suicide in his home in a suburb of Seoul.

Like Kim Sang-ho, he had suffered injuries during the Sewol mission that prevented him from working again as a diver. Last September, he testified during a hearing of the government’s Sewol investigative commission that he had been haunted by painful memories of handling dead bodies he retrieved from the Sewol.

His case has become a rallying cry for his surviving colleagues as they call on the government for financial support for medical bills and psychological counselling.

“As divers, really, we were doing work that should be the government’s responsibility. It’s only fair that they compensate us for how we suffered,” Kim Sang-ho said.

After uniting the country two years ago, the Sewol sinking has mostly faded from the South Korean public agenda.

At the end of June, the state investigative commission’s mandate expired, and its task now is to write a report based on findings collected so far through interviews with survivors and rescuers.

But the commission members say they haven’t had enough time to thoroughly investigate, and need the government to allocate the commission more budget so it can investigate further, through interviews and parsing of official documents.

Some have argued that the government is trying to brush the painful episode aside.

“Government in Korea is not trusted to be fair and objective, particularly about its own shortcomings, and in turn does not trust the good faith of so-called independent bodies. This impasse may continue until the next administration,” said Michael Breen, a Seoul-based historian and author of the book The Koreans.

Kim Sang-ho says he’s hopeful that investigators can compile a factual record of the causes of and circumstances surrounding the sinking, that South Koreans can learn from in the future. He hopes that the Sewol can be the end of the string of maritime tragedies he has seen throughout his career.

“I don’t ever want to get another call asking me to come to one of these accidents,” he said. 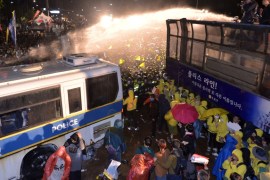 Violence broke out at a rally over the government’s handling of ferry disaster. 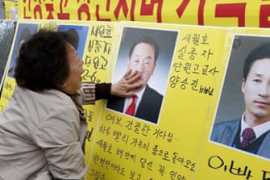