Mumbai, India – It is almost 10:30pm and Mohammad Rafiq Shaikh is trying to stitch up the last of the sling bags for an order that needs to be dispatched the next day. He usually leaves his workshop by 10pm, but today there is extra work.

Shaikh is an expert at making items out of leather and faux leather. He learned his skill as a child from craftsmen in Delhi, where he lived and worked for 20 years before moving to Mumbai in search of better opportunities.

He lives and works in Dharavi, Mumbai’s labyrinthine slum that was once Asia’s largest and still remains India’s most famous, owing its popularity in part to the 2008 film, Slumdog Millionaire. Located in the heart of the city in about 200-hectares of space, it is home to almost a million people, and is dotted with thousands of small-scale and cottage industries including pottery, leatherwork and zari embroidery – crafts that have been alive in some families for generations.

Contrary to popular belief that only dirt and squalor can be found in a slum, Dharavi has enterprises that are said to generate revenue of over $650m a year.

Yet, a large number of the residents of Mumbai’s most productive informal settlement belong to low or middle-income groups and have to work around the clock to feed their families.

Many, like Shaikh, have left their families back in their native villages because they cannot afford to provide for them in a city as expensive as Mumbai.

All his life, Shaikh worked hard to earn enough to give his family – settled in a village in Bihar – a respectable lifestyle. “I used to cut down on my trips back home to save money to fulfil their aspirations,” says the 41-year-old.

However, things started changing for the better for Shaikh and many other Dharavi artisans two years ago when Dharavi’s first online marketplace, Dharavimarket.com, was launched.

Dharavimarket.com is the first website created exclusively to sell products made by artisans from the slum. Launched in August 2014 by social entrepreneur Megha Gupta, it is also the first platform of its kind for an Indian urban slum. The website, which ships worldwide, showcases more than 1,000 items such as bags, jackets, apparel, pottery and miscellaneous corporate gifts crafted by almost 300 artisans from Dharavi.

Gupta, 30, noticed the talent of the craftsmen while working on a freelance urban planning project in Dharavi in 2012. The sheer volume of activity in the slum and the effort the residents put into their work surprised her.

“The craftsmen worked from morning to night to create world-class products which definitely deserved being sold internationally,” Gupta says.

She also found them under-selling their products. “The artisans were able to make a sale in the local markets, but their craft rarely got them the profits they deserved,” she recalls.

Some of them were also forfeiting their profits to middlemen. They obviously had no choice but to work long hours to eke out a living.

Dharavimarket.com was born to give the artisans a chance to open their sales internationally by going online.

To involve the craftsmen in the process, Gupta cashed in on the high levels of smartphone penetration within the lower income groups in India.

With 220 million subscribers, according to market research company Counterpoint Research, India is the second largest smartphone market in the world after China.

The website is connected to a smartphone application which allows registered users to upload images of their products and fix their own rates. Once a buyer places an order, they receive a notification.

“I had seen how proficient they were at using WhatsApp,” she says, adding that the craftsmen found it easy to take photos of their products and showcase their work to their potential clients and existing customers through it. As a large number of the artisans owned a smartphone, using the app was a breeze for them.

Dharavimarket.com has had buyers from places as far afield as Europe, the Americas and the Middle East. “They love getting high-quality, custom-made goods at reasonable rates from us,” Gupta says.

An association with Dharavimarket has been a win-win situation for the craftsmen. They enjoy the regularity of work and the profits they earn. Mohammad Mujahid Husain, a 23-year-old craftsman who specialises in making leather jackets, easily sells 15 to 20 of them each day through Dharavimarket.

“When the consumers like the quality of work, they come back with repeat orders,” Husain adds.

Besides making them comfortable financially, getting work through Dharavimarket has also reduced the time the artisans spend in marketing their work. “Earlier I had to spend my weekends visiting shop owners to showcase my work,” Husain says. “Now I can use those two days to do something I enjoy,” he adds.

Shaikh feels a respect for his art. Even though there may be several leatherwork experts listed with Dharavimarket, he is the go-to artisan for Gupta. “Whenever a customer asks for a new product, she comes to me, knowing that Rafiq bhai will be able to handle it,” he says.

Gupta regularly gets top design school interns to introduce them to international styles. “They are already familiar with the colour and style trends of 2017,” she says.

A large chunk of their work now comes through corporate clients who are looking for large quantities.

“Our customers find us through the website and contact me directly to place bulk orders for customised items,” Gupta says. She takes these orders on behalf of the craftsmen and passes on the clients’ requirements. Some of the products are sold through online marketplaces like Snapdeal and Flipkart.

They have benefited by managing waste in and around their neighbourhood and by keeping their surroundings clean.

“We want to improve their lives holistically,” Gupta says. The credits earned can later be exchanged for skill-enhancement courses, a packet of grains or improvement of their workspace. Gupta hopes to take this programme full throttle in August after a round of funding she is expecting for Dharavimarket next month.

Gupta is happy to have given the craftsmen the opening she believes they deserved. “The artisans have developed a sense of pride for their work with the recognition they have received,” she says.

“Now I’m not worried that my children will make a demand I cannot fulfil.” 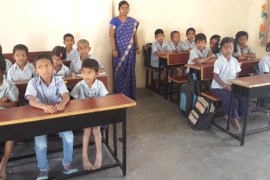 No wall or toilets: Going to school in an Indian slum

Inside an Indian slum school as it battles to provide a better education for its impoverished students. 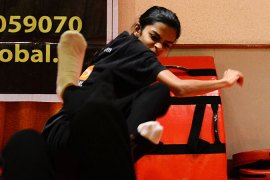