As I groped in the dark to dress this morning (a necessity, when sharing a ship cabin the size of a walk-in closet, with three others), there was a knock on the door.

The field coordinator of the Doctors Without Borders, or MSF, Kim Clausen said, everyone needed to report immediately for a meeting downstairs in the Officer Day Room.

When I arrived, it was clear by Clausen’s demeanor, there was an intense day ahead. An urgent fax had been sent from the Maritime Rescue Coordination Centre or MRCC. Clausen told us this was “unprecedented” in his experience.

All ships in the vicinity were instructed to report to 20 nautical miles off the coast of Libya to assist what was expected to be a large number of refugee boats, in distress.

Storms that stretched over the course of a week, had likely caused a backup and smugglers were waiting for the first night to send their boats into calmer waves on the Mediterranean Sea.

The collective adrenaline on the boat from the MSF team to the Ukrainian Crew, was surging.

Within 40 minutes, our ship would be in area. The ship is called the Bourbon Argos. It is 68 metres long and is outfitted with an emergency room. The deck can hold up 1,000 refugees if need be.

The Communications Officer Sara Creta told me, after rescues, it is so cramped, the refugees form a kind of human “carpet” on the deck.

You have likely seen the images as I have, on television, countless times. But when I first saw the boats packed with people, bobbing up and down in the waves, at the mercy of the Mediterranean, I was hit by a series of emotions that come with bearing witness to people’s suffering.

Whether these people are fleeing war and persecution or economic hardship, no one embarks on such a treacherous journey without a history of misery or misfortune rooted In their homelands.

The MSF team sends a small boat to distribute life jackets, communicate with the refugees and let them know they will now be safe.

The first priority is to rescue boats that are ankle deep in water and are beginning to sink. Over the course of the day, MSF rescued more than 628 people, including 13 kids and 98 women.

I meet an Ethiopian man named Mohamed. At 73, is the oldest refugee anyone on board can recall rescuing.

He is a patrician man who says he suffers from diabetes and a skin disease and is hoping he can get healthy again and continue working.

I meet a chubby 7-month-old boy who seems oblivious to everything but his mother and the bottle she’s giving him.

A man named Wisdom City, tells me he left Sierra Leone two years ago after his father was killed as a result of the fighting in the country.

He is a college graduate with a marketing degree and a vision of continuing his studies in Europe so he can provide for his family. When I tell him he must miss his family incredibly, he says he misses his father, his “everything”.

Less than a half hour after our interview is finished, Wisdom approaches me to ask if I could give him a phone to call his family. He is the first of several people to make the same request and of course, I wish I could accommodate them all.

After the commotion of the rescues dissipates, I stand back and watch as the men, women and children get blue backpacks of food and clothing and line up to take showers.

I study their faces. They convey the full spectrum of emotions – exhaustion, fear, elation, wariness and anger.

There is another palpable emotion – relief.

It  explains why after such arduous journeys, people want to pick up the phone and share their news. They want to tell their loved ones, they are finally safe and they are en route to Italy. 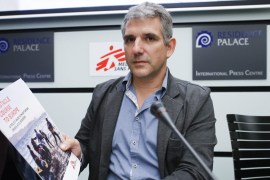 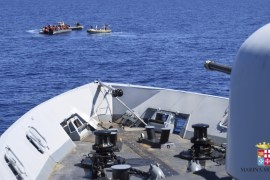