Bumdoor/Anantnag, Indian-administered Kashmir – Aside from the black ravens that kraaw from every tin roof in Kawpoor, there is complete silence.

It is early morning on Wednesday and for a while it seems that no one lives here. Doors and windows are closed. There are only the ravens, dozens and dozens of them, and the silence.

It is in this Kawpoor neighbourhood, whose name literally means the abode of crows, of Bumdoor village – where clusters of small houses lie imposingly between orchards, streams and vast paddy fields – that the rebellion that has overtaken the whole of Kashmir in the past week started last Friday night.

On a narrow path that leads from the main road to the houses, a rectangle of stones, sticks and yarn, with black and green flags at the corners, marks the spot where the 22-year-old Kashmiri rebel fighter Burhan Wani was killed. It has become a place of pilgrimage.

“No one ever visited here till last week. Nothing ever happened in this village,” says Showkat Ahmad, a 24-year-old engineering student. “But for the last five days, more than a thousand people from all over visit here every day to see where Burhan was martyred.”

Ahmad says the gun battle in which Burhan was killed was the first he had ever witnessed in this quiet village. Everyone seems surprised by it, and among the villagers there is an uncomfortable silence. They see accusations in the eyes of those who visit.

“They think we didn’t try to save them … that we didn’t throw stones at the soldiers and give cover to Burhan and the two other martyrs,” says Ahmad. “But we had no idea they were here and by the time we knew it, it was very late.”

READ MORE: Rage in Kashmir over killing of youth by Indian army

The villagers say that the Indian soldiers and the police started arriving in the village at around noon on Friday, but they behaved in such a way that no one suspected something was amiss.

Abdul Gani Dar lives just across from the house where the three fighters had spent the night on Thursday and the day on Friday. It is a large house, a section of which belonged to an uncle of one of the fighters killed in the gun battle, Sartaj Ahmad Sheikh.

“The soldiers told us that Mehbooba Mufti [the chief minister of Indian-administered Kashmir] was coming to the nearby orchard to inaugurate something. And we went on with our day at the fields and in the orchards,” he says.

By 4pm, more than a hundred Indian soldiers and police had cordoned off the Kawpoor neighbourhood. Some had taken positions in the partially built houses, some in empty cement drains, others in public bathrooms or behind trees.

“At around 5.30pm, Sheikh was the first to walk out of the gates of the house. He was shot dead right there,” says a neighbour who asked not to be named. “A few moments later, Burhan and Parvez – the two other militants – emerged from the house and they ran for around 25 metres and then they too were shot dead.”

Soon after the three were killed, hundreds of villagers came out and clashed with the police. Scores were wounded.

By evening, when the news had spread that one of those killed was Burhan Wani, the Hizb-ul Mujahideen commander who had been widely credited with reviving armed resistance to Indian control of the disputed region, people began to come out on to the streets across Indian-administered Kashmir.

The face of the armed rebellion

Wani had picked up a gun in 2010 as a 15-year-old boy. But unlike other fighters, he did not choose an alias or conceal his identity. Instead, he posted pictures and videos of himself on social media platforms such as Facebook and, in so doing, appealed to a new generation of Kashmiris, bringing the armed resistance back into the public imagination. Wani became a household name.

On Saturday morning, an estimated 200,000 people attended his funeral prayers in Tral. By the time he was buried, Indian-administered Kashmir was in the throes of yet another rebellion.

On Saturday, the first day of the uprising, at least 15 civilian protesters were killed and more than 200 wounded in firing by the Indian armed forces.

According to Indian police, police stations, posts and military camps were attacked, with many set ablaze.

A curfew was imposed in all four districts of the southern part of the region, the phone network and the internet was shut down.

A kind of darkness has descended on Indian-administered Kashmir, punctuated by the sounds of gunshots and ambulance sirens. The south of the region has been at the heart of that darkness.

For five days no journalists could make it here: afraid not only of the Indian forces but also of angry residents who believe the Indian media has distorted their stories.

Myself and a colleague, working with an Indian newspaper, became the first journalists to travel through the southern part of the region, along stretches of highway and interior roads controlled by young civilian protesters and through major towns under a curfew imposed by hundreds of Indian troops.

Along our route, house windows are shattered. Stones, tree trunks and rocks litter roads smeared orange by the bricks young boys throw at the Indian forces.

At midday on Wednesday, a strict curfew is in place. Indian forces stand in small groups along the roads or sit on the pavements, making sure that nothing moves. An elderly couple trudge along the road, each carrying a sack.

“Were you throwing stones yesterday?” an Indian soldier asks the old man.

“No, I have to take my wife to hospital. She has fever and urine infection,” he replies.

“I think I saw you throwing stones yesterday. Now you try to appear all old and feeble but yesterday there were dozens of old men with white beards throwing stones,” the soldier tells him.

A district administration officer in Anantnag, speaking on condition of anonymity, told Al Jazeera that such a curfew is intended to pressure people into pleading with those protesting to stop so that the curfew might be lifted.

“That is the way that has been decided. Starve them. Let the parents beg their young sons to give up and we could return to normality,” the officer said.

‘I was bleeding and crying and they beat me with sticks’

In the post-operation ward of the Anantnag District Hospital, 17-year-old Mohammad Saeem’s cries pierce the stale air. He is pleading with his brother to cut the plaster on his leg.

Saeem was shot by the police on Monday. Three bullets hit his left leg, shattering the bones in his foot and shin.

On another bed, across the aisle from Saeem is 46-year-old Masooda, a mother of four daughters, the youngest of whom is seven.

She endures her pain quietly. Her hip hurts, she says, and so does her back and her shoulders.

“I was walking in our lane in Ashajipora when the police and the CRP [the Central Reserve Police Force] came and I tried to run but I fell down in pain,” Masooda says.

A bullet pierced her upper thigh and then, she says, police came and beat her, her husband and two of her daughters.

“I was bleeding and crying and many of them came and put me in a cart that was there and then they beat me with sticks from all sides. Then they overturned the cart and tried to drag me into one of the houses while they kept beating me,” she says.

Her two daughters and husband were beaten as they tried to protect her, she adds.

She doesn’t remember how she got to the hospital.

Of the roughly 30 patients in the ward, eight are women and the oldest among them is 79-year-old Sara Begum.

She says that she was beaten by local police officers who came to her home in the Goriwan neighbourhood looking for her youngest son, a known protester.

Her right leg is swollen and bruised from the ankle to the knee. Her other leg has 13 stitches.

“They beat me up as if they couldn’t see that I was a sick old woman. One of them spread me on the floor and climbed on my chest,” she murmurs.

Her grandson, Mohammad Asif, says the policemen beat her with a wooden meat-tenderiser that they found lying around.

“They beat up all the women in the house. They stripped my 12-year-old sister completely naked,” says another grandson, 15-year-old Umar. “I wish I was in the house, I only wish. For three nights, I have not slept. The image of my sister naked haunts me. It won’t let me sleep. For the last three days, I have only thought of murdering the policemen who stripped my sister.”

With each story like this, along with the well known protesters who the police lock up every time an uprising seems imminent, hundreds such as Umar are moved to join the protests for the first time in their lives.

Outside the hospital I meet Zubair, a volunteer at a free medical camp. In the middle of our conversation about the differences in the protests this time, he absent-mindedly lifts his blue T-shirt to scratch at the small holes made by the pellet guns the Indian forces use to contain the protests.

“This time,” he says, “people had no demands. Nothing … they did not seek a reform in a law, a probe in a case, nothing at all. It was a mourning of Burhan’s death or rather a celebration of Burhan’s life. But more than that,” he says, “it was the time we repeated the word Azadi [freedom] again.”

But the question remains whether, as in 2008 and 2010, a fragile normalcy will again settle upon this restive region or if, this time, things will be any different.

As of now, with no other response to the people’s rebellion from the Indian government other than force and with a lack of ideas among the region’s resistance leadership, the past week – with at least 35 civilians killed and more than 1,600 seriously wounded – appears to be yet another dark chapter in the book of Kashmir’s recent history. 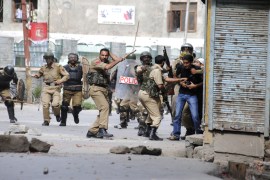